Bedfordshire is in Home Counties

died at Bristol Castle, Bristol. She was buried at Amesbury Abbey.

was appointed Nun at Amesbury Abbey.

died at Ampthill Castle, Ampthill. He was buried at Blackfriars Preachers, Ludgate.

The Chronicles of Froissart Chapter XX - How king Robert of Scotland died. Mar 1328. Treaty of Edinburgh-Northampton. AND when that the Scots were departed by night from the mountain, whereas the king of England (15)

had besieged them, as ye have heard herebefore, they went twentytwo mile through that savage country without resting, and passed the river of Tyne right near to Carlisle ; and the next day they went into their own land, and so departed every man to his own mansion. And within a space after there was a peace purchased between the kings of England and Scotland ; and as the English chronicle saith,' it was done by the special counsel of the old queen (33)

; for by their means there was a parliament holden at Northampton, at the which the king (15)

being within age granted to the Scots to release all the fealties and homages that they ought to have done to the crown of England, by his charter ensealed, and also there was delivered to the Scots an indenture, the which was called the Ragman, wherein was contained all the homages and fealties that the king of Scots and all the prelates, earls and barons of Scotland ought to have done to the crown of England, sealed with all their seals, with all other rights that sundry barons and knights ought to have had in the realm of Scotland. And also they delivered to them again the black cross of Scotland, the which the good king Edward conquered and brought it out of the abbey of Scone, the which was a precious relic ; and all rights and interests that every baron had in Scotland was then clean forgiven. And many other things were done at that parliament to the great hurt and prejudice of the realm of England, and in manner against the wills of all the nobles of the realm, save only of Isabel (33)

the old queen and the bishop of Ely

: they ruled the realm in such wise, that every man was miscontent. So that the earl Henry of Lancaster (47) and sir Thomas Brotherton (27), earl marshal, and sir Edmund of Woodstock (26)

, the king's uncle, and divers other lords and commons were agreed together to amend these faults, if they might. And in that meantime the queen Isabel (33)

caused another parliament to be holden at Salisbury, at the which parliament sir Roger Mortimer (40)

was made earl of March against all the barons' wills of England, in prejudice of king and his realm, and sir John of Eltham (11)

the king's brother was made earl of Cornwall. To the which parliament the earl Henry of Lancaster (47) would not come, wherefore the king was brought in belief that he would have destroyed his person; for the which they assembled a great host and went toward Bedford, whereas the earl Henry (47) was with his company. Then the earl marshal (27) and the earl of Kent (26)

and the earl of Lancaster (47), on whose part was sir Henry lord Beaumont (48)

, sir Fulke Fitz-Warin (43), sir Thomas Rocelin, sir William Trussel, sir Thomas Wither and about a hundred knights, who were all expelled out of England by the counsel of queen Isabel and the earl Mortimer : for he was so covetous, that he thought to have the most part of all their lands into his own hands, as it is more plainly shewed in the English chronicle, the which I pass over and follow mine author.

was elected to MP Bedford.

and Mabel Muscgros at Biggleswade.

was born in Bletsoe. 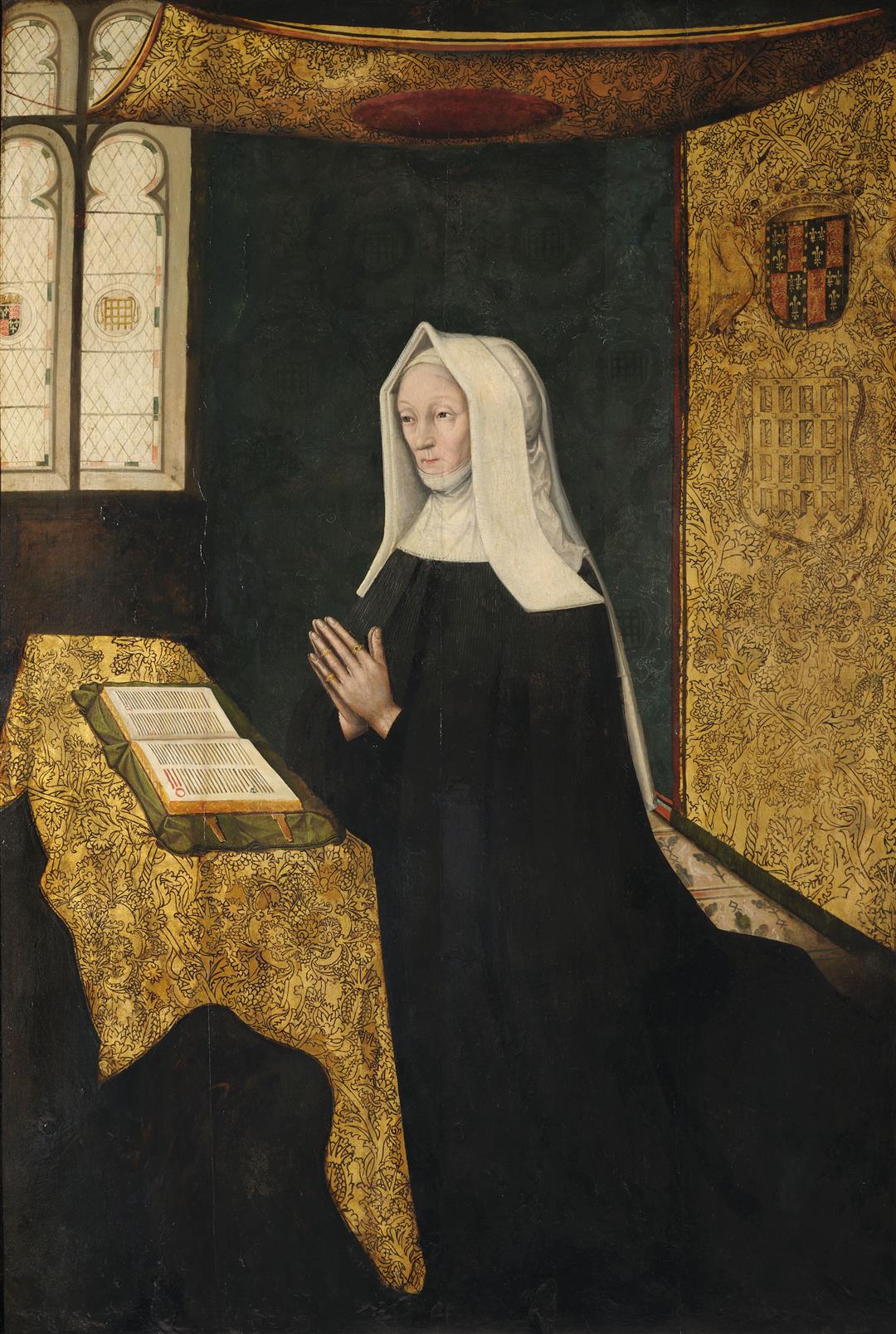 in the Masters Lodge, St John's College. Commissioned by John Fisher Bishop of Rochester 1469-1535 (40). Note the Beaufort Arms on the wall beneath which is the Beafort Portcullis. Repeated in the window. She is wearing widow's clothes, or possibly that of a convent; Gabled Headress with Lappets. On 29 Mar 2019, St John's College, Cambridge, which she founded, announced the portrait was original work by Wewyck.

in the Masters Lodge, St John's College. Commissioned by John Fisher Bishop of Rochester 1469-1535 (40). Note the Beaufort Arms on the wall beneath which is the Beafort Portcullis. Repeated in the window. She is wearing widow's clothes, or possibly that of a convent; Gabled Headress with Lappets. On 29 Mar 2019, St John's College, Cambridge, which she founded, announced the portrait was original work by Wewyck.

and her daughters, before Baron Thurland (68), who had formerly been steward of Courts for me; we carried our cause, as there was reason, for here was an impudent as well as disobedient son (26)

, by instigation, doubtless, of his wife, one Mrs. Ogle (23) (an ancient maid), whom he had clandestinely married, and who brought him no fortune, he being heir-apparent to the Earl of Berkshire (60)

who did inherit the Earldom]. Craven in line to inherit in the event the 2nd or 3rd Earl didn't have issue which proved to be the case but Craven had died by that time so his son Henry Bowes Howard 4th Earl Berkshire, 11th Earl Suffolk 1686-1757

became the 4th Earl. We lay at Brickhill, in Bedfordshire, and came late the next day to our journey's end.
This was a journey of adventures and knight-errantry. One of the lady's servants being as desperately in love with Mrs. Howard's

, and she riding on horseback behind his rival, the amorous and jealous youth having a little drink in his pate, had here killed himself had he not been prevented; for, alighting from his horse, and drawing his sword, he endeavored twice or thrice to fall on it, but was interrupted by our coachman, and a stranger passing by. After this, running to his rival, and snatching his sword from his side (for we had beaten his own out of his hand), and on the sudden pulling down his mistress, would have run both of them through; we parted them, not without some blood. This miserable creature poisoned himself for her not many days after they came to London.

died at Ashbourne. He was buried at Church of St John, Cockayne Hatley.

was born at Cople.

John Evelyn's Diary 1688 August. 15 Aug 1688. I went to Althorpe, in Northamptonshire, seventy miles. A coach and four horses took up me and my son at Whitehall, and carried us to Dunstable, where we arrived and dined at noon, and from thence another coach and six horses carried us to Althorpe, four miles beyond Northampton, where we arrived by seven o'clock that evening. Both these coaches were hired for me by that noble Countess of Sunderland (42)

, who invited me to her house at Althorpe, where she entertained me and my son with very extraordinary kindness; I stayed till the Thursday. 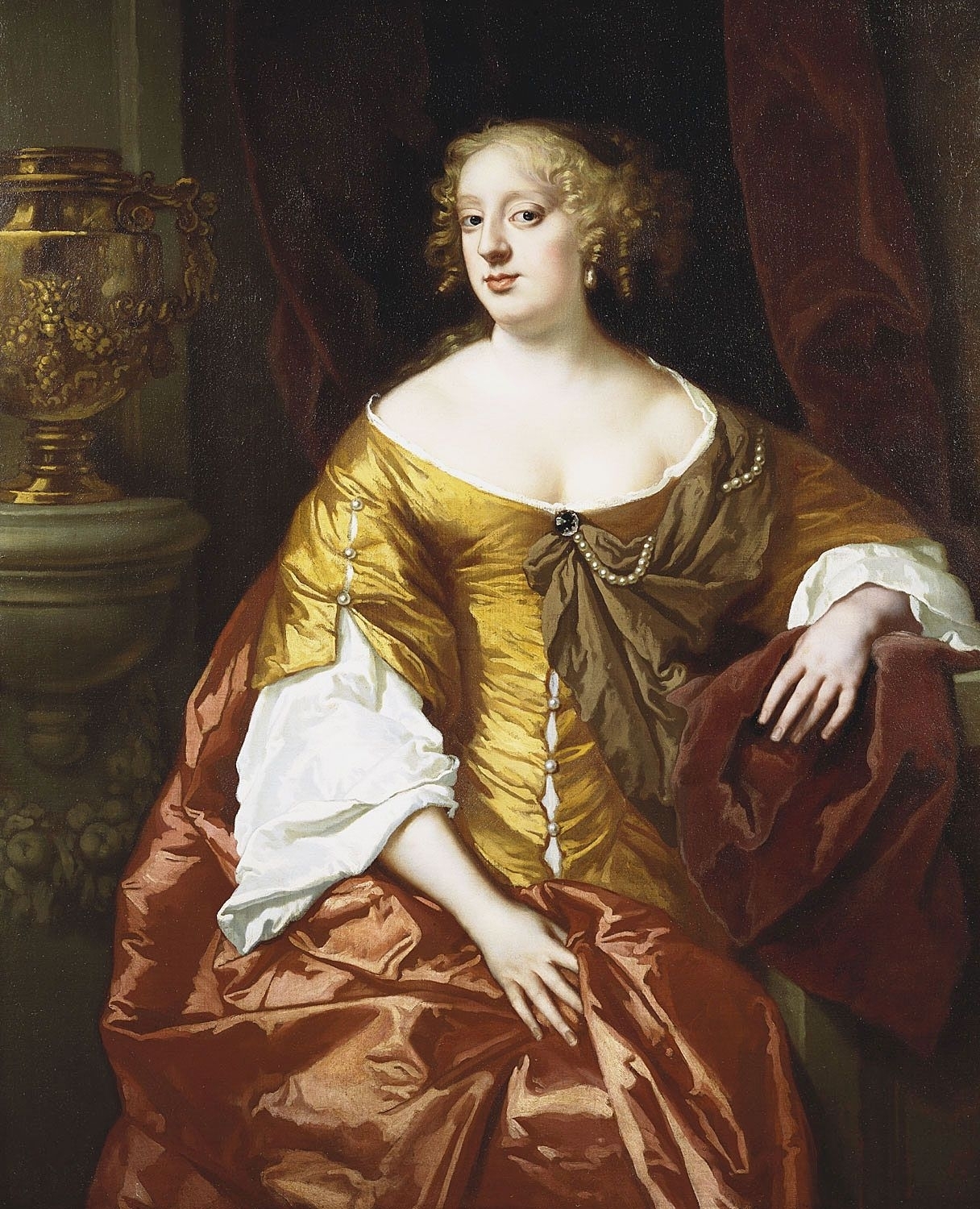 . One of the Windsor Beauties.

John Evelyn's Diary 1688 August. 23 Aug 1688. I left this noble place and conversation, my lady having provided carriages to convey us back in the same manner as we went, and a dinner being prepared at Dunstable against our arrival. Northampton, having been lately burned and re-edified, is now become a town that for the beauty of the buildings, especially the church and townhouse, may compare with the neatest in Italy itself.
Dr. Sprat (53), Bishop of Rochester, wrote a very honest and handsome letter to the Commissioners Ecclesiastical, excusing himself from sitting any longer among them, he by no means approving of their prosecuting the Clergy who refused to read the Declaration for liberty of conscience, in prejudice of the Church of England.
The Dutch make extraordinary preparations both at sea and land, which with no small progress Popery makes among us, puts us to many difficulties. The Popish Irish soldiers commit many murders and insults; the whole nation disaffected, and in apprehensions.
After long trials of the doctors to bring up the little Prince of Wales by hand (so many of her Majesty's children having died infants) not succeeding, a country nurse, the wife of a tile maker, is taken to give it suck. 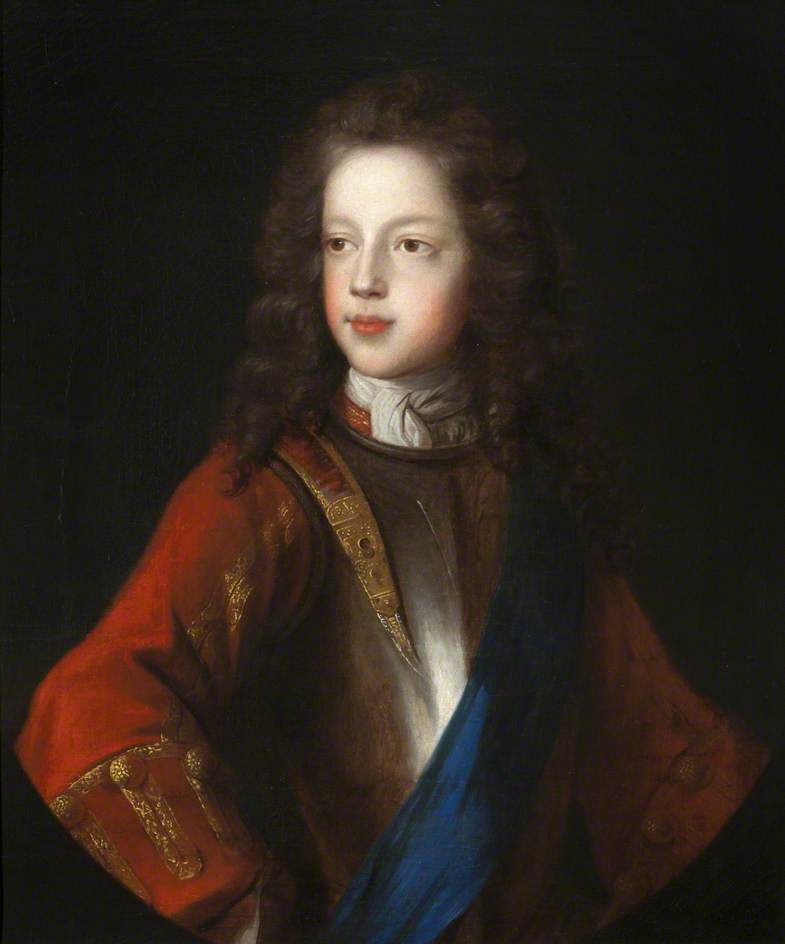 was granted the manor of Eaton.

and Elizabeth Bray were married at Eaton.

Penelope Anderson Lady Bicester aka Bisseter -1691 was born in Eyeworth.

and Susannah Thorne 1560- were married at Lidlington.

died. She was buried at Bing Vault, All Saints Church, Southill.

succeeded 5th Viscount Torrington. He enjoyed the Viscountcy for only twenty-four days dying on 08 Jan 1813. Further, the seat of the Viscountcy Southill Park had been sold to pay off debts.

was born at Stotfold.

was buried at All Saints Church, Turvey. 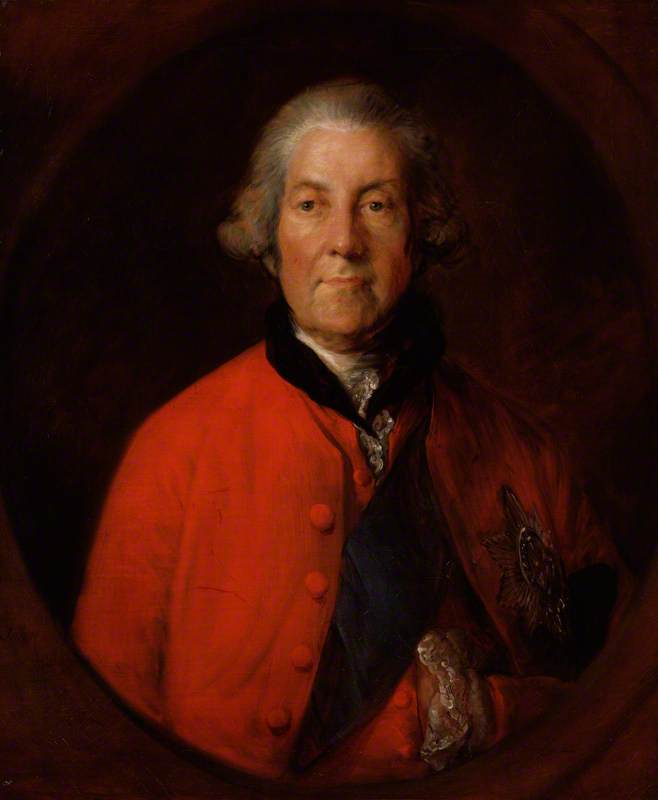 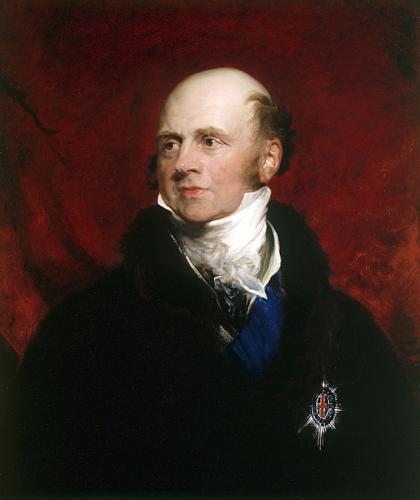