1190 Massacre of the Jews at Bury St Edmunds

Bury St Edmunds is in Suffolk.

Massacre of the Jews at Bury St Edmunds

On 18 Mar 1190 at Bury St Edmunds fifty-seven of the Jewish population were murdered.

The Chronicles of Froissart Book 1 Chapter 10 How that the queen Isabel arrived in England with sir John of Hainault in her company. 1326. THUS was sir John of Hainault (38) moved in his courage and made his assembly, and prayed the Hainowes to be ready at Hal, and the Brabances at Breda, and the Hollanders to be at Dordrecht at a day limited. Then the queen of England (31) took leave of the earl of Hainault (40) and of the countess (32), and thanked them greatly of their honour, feast and good cheer that they had made her, kissing them at her departing. Thus this lady (31) departed and her son (13) and all her company with Sir John of Hainault (38), who with great pain gat leave of his brother, saying to him: 'My lord and brother, I am young and think that God hath purveyed for me this enterprise for mine advancement. I believe and think verily that wrongfully and sinfully this lady hath been chased out of England, and also her son. It is alms and glory to God and to the world to comfort and help them that be comfortless, and specially so high and so noble a lady as this is, who is daughter to a king and descended of a royal king; we be of her blood and she of ours. I had rather renounce and forsake all that I have and go serve God over the sea and never to return into this country, rather than this good lady should have departed from us without comfort and help. Therefore, dear brother, suffer me to go with your good-will, wherein ye shall do nobly, and I shall humbly thank you thereof, and the better thereby I shall accomplish all the voyage.' And when the good earl of Hainault had well heard his brother (38), and perceived the great desire that he had to his enterprise, and saw well it might turn him and his heirs to great honour hereafter, said to him: 'My fair brother, God forbid that your good purpose should be broken or let: therefore in the name of God I give you leave'; and kissed him, straining him by the hand in sign of great love. Thus he departed and rode the same night to Mons in Hainault with the queen of England (31). What should I make long process? They did so much by their journeys that they came to Dordrecht in Holland, whereas their special assembly was made. And there they purveyed for ships great and small, such as they could get, and shipped their horses and harness and purveyance, and so commended themselves into the keeping of God and took their passage by sea. In Sanses de Boussoit, the lord of Vertaing, the lord of Potelle, the lord Villers, the' lord of Hennin, the lord of Sars, the lord of Bousies, the lord of Aubrecicourt, the lord of Estrumel, and sir Wulfart of Ghistelles, and divers other knights and squires, all in great desire to serve their master. And when they were all departed from the haven of Dordrecht, it was a fair fleet as for the quantity, and well ordered, the season was fair and clear and right temperate, and at their departing with the first flood they came before the dikes of Holland; and the next day they drew up their sails and took their way in coasting Zealand; and their intents were to have, taken land at Dongport;1 but they could not, for a tempest took them in the sea, that put them so far out of their course that they wist not of two days where they were: of the which God did them great grace, for if they had taken land at the port whereas they had thought, they had been all lost, for they had fallen in the hands of their enemies, who knew well of their coming, and abode them there to have put them all to death. So it was that about the end of two days the tempest ceased, and the mariners perceived land in England and drew to that part right joyously, and there took land on the sands without any right haven or port at Harwich, as the English chronicle saith, the 24th day of September, the year of our Lord MCCCXXVI., and so abode on the sands three days with little purveyance of victual, and unshipped their horses and harness, nor they wist not in what part of England they were in, other in the power of their friends or in the power of their enemies. On the fourth day they took forth their way in the adventure of God and of Saint George, as such people as had suffered great disease of cold by night and hunger and great fear, whereof they were not as then clean rid. And so they rode forth by hills and dales on the one side and on the other, till at the last they found villages and a great abbey of black monks, the which is called SaintEdmund, whereas they three days refreshed themselves.

Diary of Henry Machyn July 1553. 12 Jul 1553. The xij day [of] July by nyght, was cared to the Towre iij carts [full of all] maner of ordenans, as gret gune and smalle, bowes, bylls, speres, mores-pykes, arnes, arowes, gunpowther, and wetelle, monay, tentes, and all maner of ordenans, gunstones a gret nombur, and a grett nombur of men of armes; and yt had been for a gret army toward Cambryge; and ij days after the duke, and dyvers lordes and knyghts whent with him, and mony gentylmen and gonnars, and mony men of the gard and men of armes toward my lade Mare grace, to destroye here grace, and so to Bury, and alle was agayns ym-seylff, for ys men forsok hym .... and of dyvers maters, and so in dyvers plases .... contres was her grace proclamyd quen of [England.]

18 Jul 1553. The xviij. daye the duke (49), perceaving howe their succours came not, and also receyving from some of the counsell at the Tower lettres of discomfort, retoumed from Bury, and came back agayn to Cambridge.

Diary of Henry Machyn August 1555. 02 Aug 1555. The ij day of August was a shumaker bornyd at sant Edmundebere in Suffoke for herese.

On 14 Nov 1627 Elizabeth Waldegrave -1627 died. On 06 Dec 1629 Arthur Coke 1587-1629 (42) died in Bury St Edmunds. Jacobean Hooded Monument sculpted by Nicholas Stone Sculptor 1587-1647 (40) in St Andrew's Church Bramfield. White and black marble; reclining effigy of Elizabeth with Arthur kneeling in prayer above within an arched Recess; Arms over the arch and surrounding it are seven Cartouches. 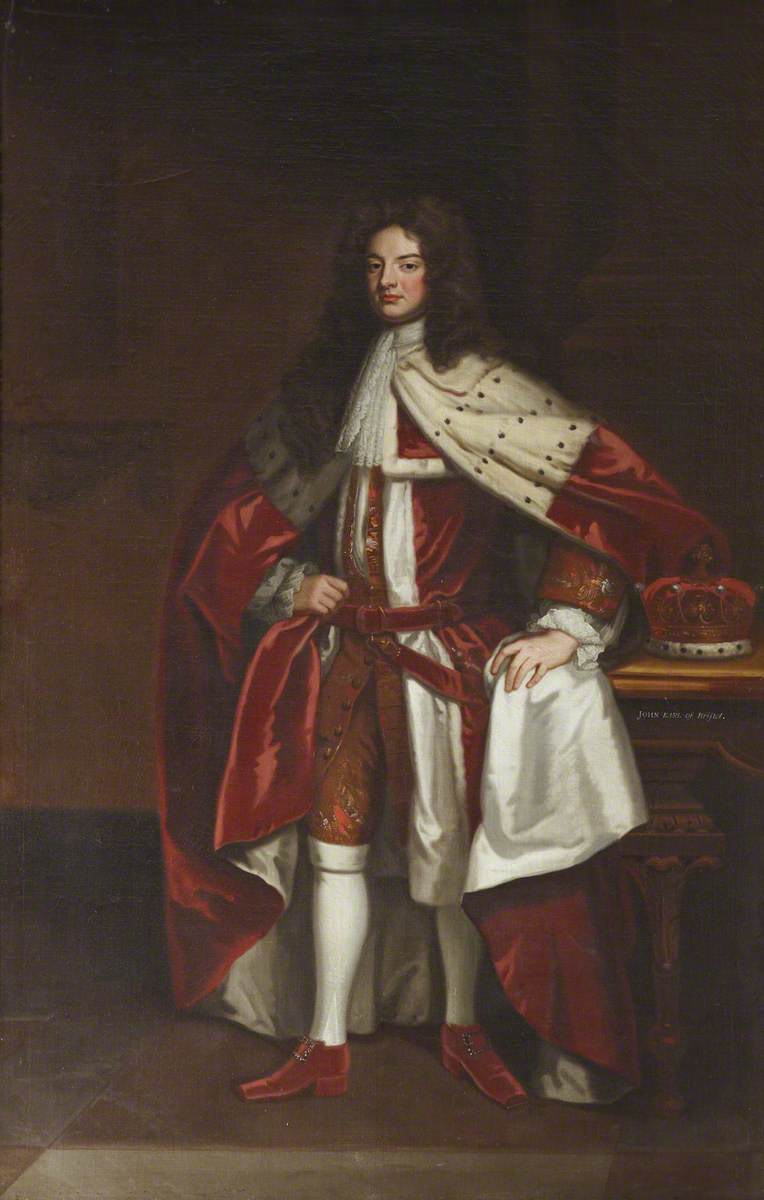 John Evelyn's Diary 04 September 1677. 04 Sep 1677. I went to visit my Lord Crofts (66), now dying at St. Edmunds Bury, and took the opportunity to see this ancient town, and the remains of that famous monastery and abbey. There is little standing entire, save the gatehouse; it has been a vast and magnificent Gothic structure, and of great extent. The gates are wood, but quite plated over with iron. There are also two stately churches, one especially.

John Evelyn's Diary 13 September 1677. 13 Sep 1677. My Lord's coach conveyed me to Bury, and thence baiting at Newmarket, stepping in at Audley-End to see that house again, I slept at Bishop-Stortford, and, the next day, home. I was accompanied in my journey by Major Fairfax, of a younger house of the Lord Fairfax, a soldier, a traveler, an excellent musician, a good-natured, well-bred gentleman. 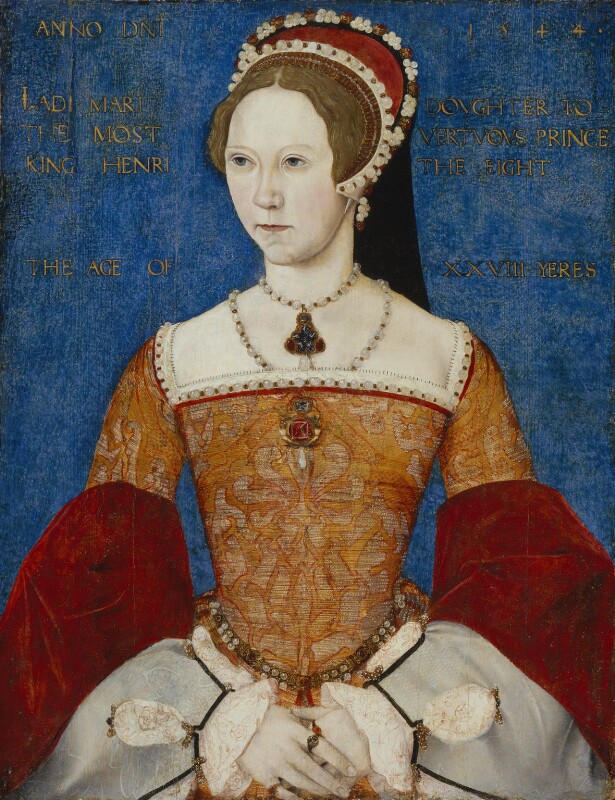 On 11 Dec 1548 John Bourchier and Frances Kitson -1586 were married at Hengrave Hall Hengrave. He a great x 5 grandson of King Edward III England. 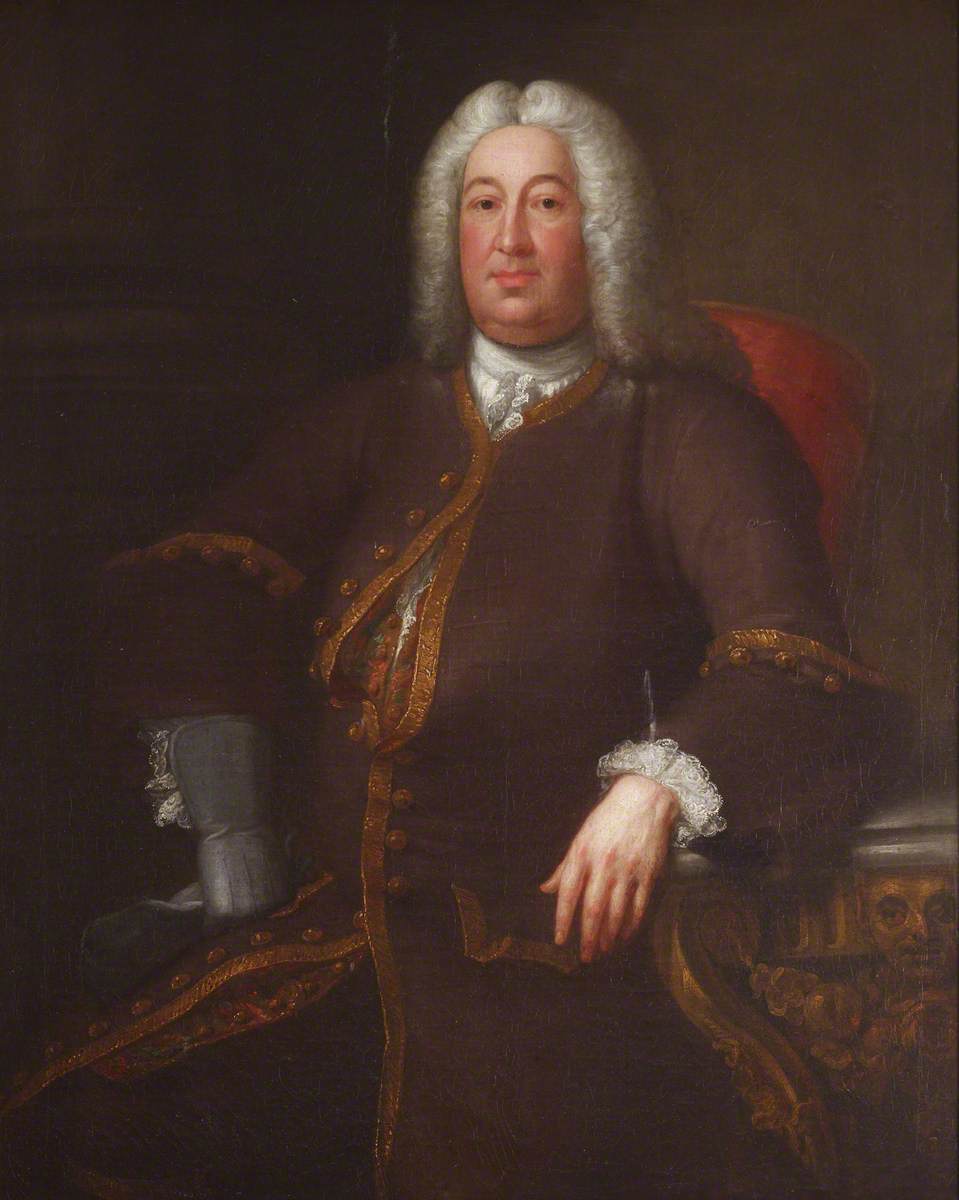 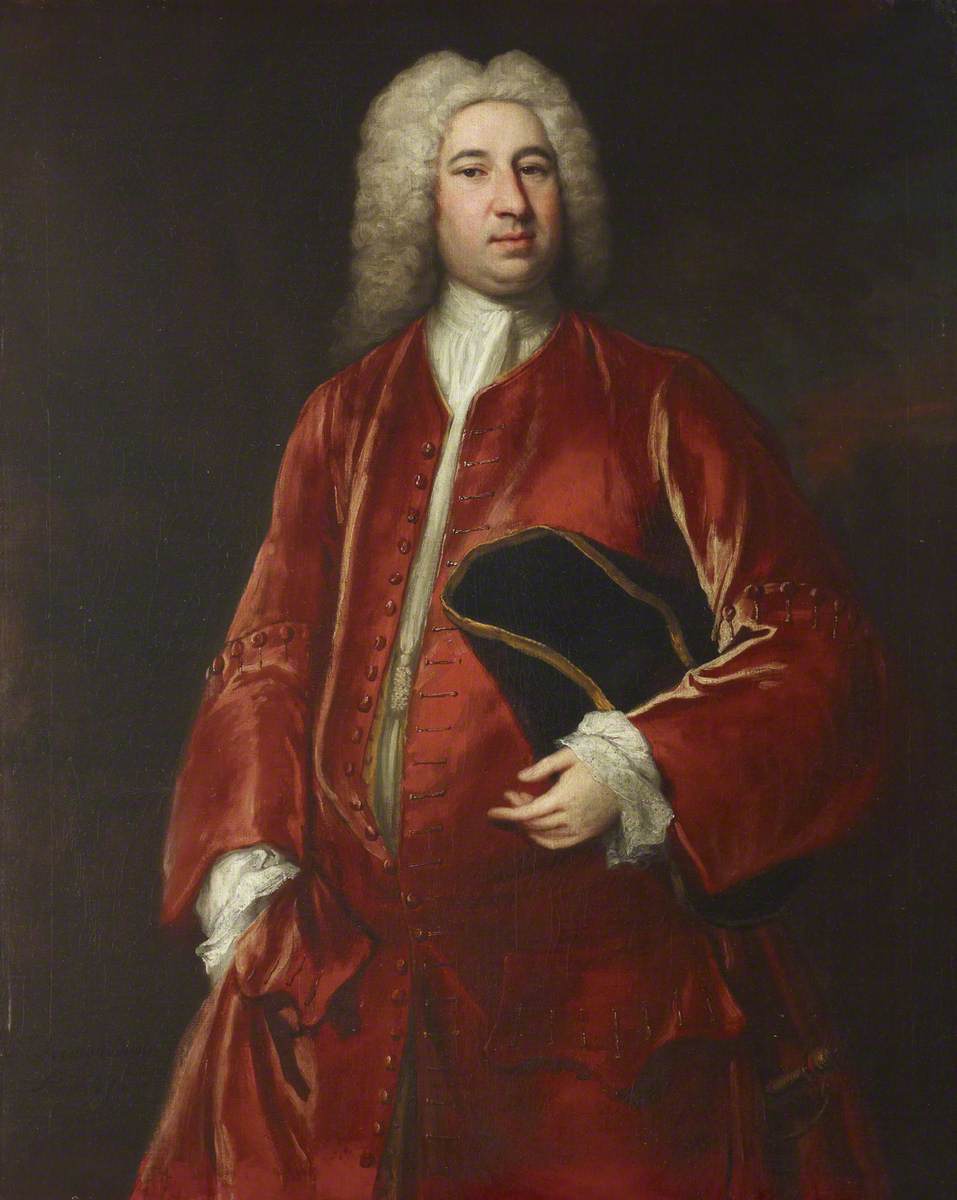 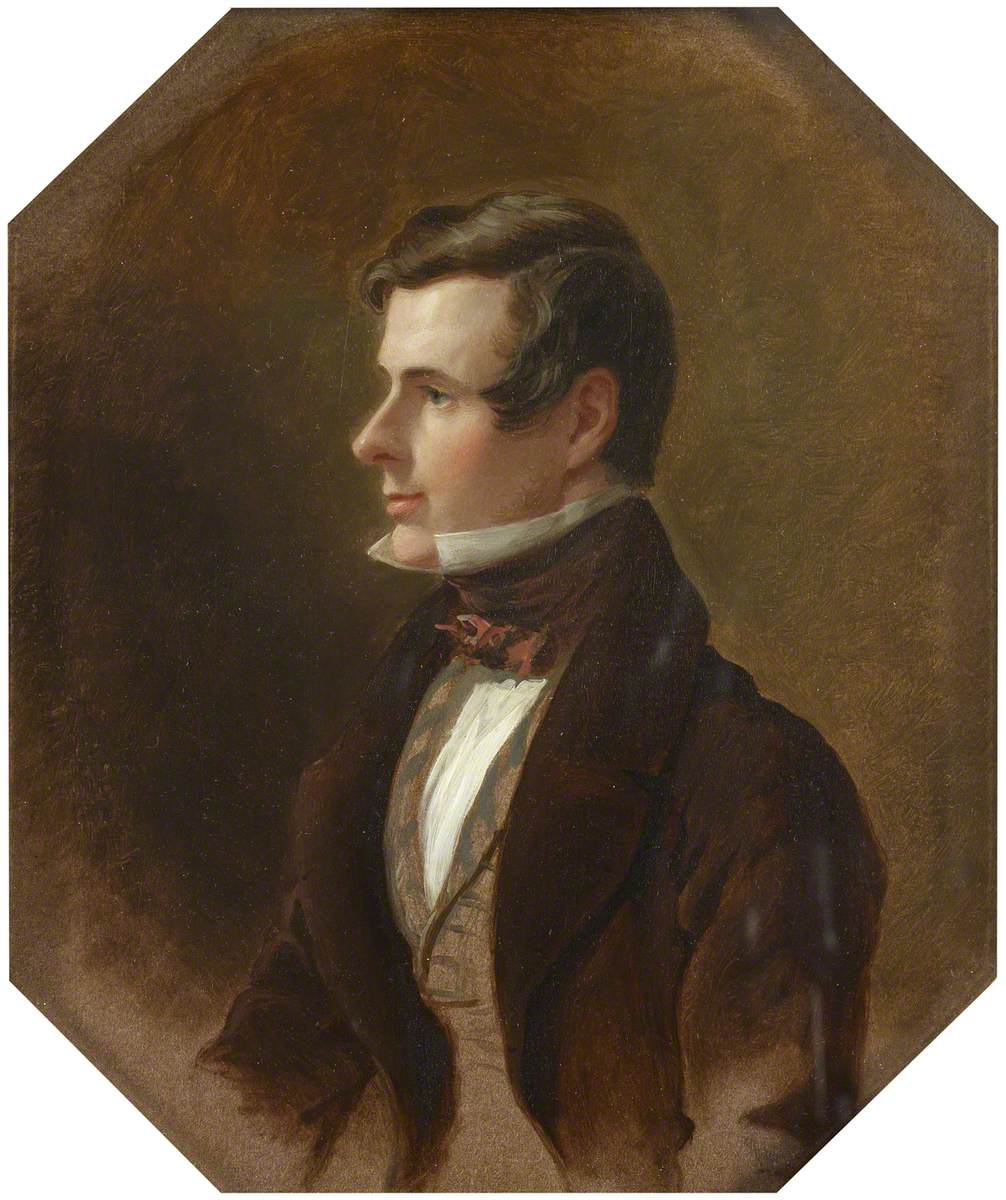