Bascinet is in Armour.

Bascinet. A open-faced military helmet with a pointed apex that covers the head and protects the neck. Typically worn with a camail. Bascinets developed with the addition of an orle. Later bascinets incorporating a visor.

Around 1340 the Camail and Jupon Period starts; around the time of the commencement of the Hundred Years War. Knights wear a bascinet with camail and a jupon. The Camail and Jupon Period is also characterised by the heavy belts slung low on the hips from which the sword was slung. Effigies of this period are characterised by having facial hair, and their hands clasped in prayer on the chest. Male effigies of this period have their head resting on Great Helms usually surmounted by their Crest.

After 10 Aug 1358. Monument to Piers Grandison 2nd Baron Grandison -1358. Lady Chapel of Hereford Cathedral. Mid 14th-century, altar-tomb with effigy and canopy, altar-tomb with range of cinquefoil-headed panels in front and panelled buttresses at ends carried up to the cornice of the canopy, effigy in mixed mail and plate-armour with camail and ridged bascinet, hauberk with scalloped lower edge, cyclas, enriched Hip Belt with dagger hanging in front and sword at side, head on cushions and feet on hound; recess with panelled back, moulded jambs and square head enriched with Paterae and trefoiled and sub-cusped pendant tracery below the head; vaulted soffit to canopy; canopy with range of six bays of open arcading with trefoiled and sub-cusped heads, crockets and finials, in arcading two headless figures of the Coronation of the Virgin, headless figure with book, archbishop with cross-staff, St. John the Baptist holding a roundel with the Agnus Dei, and a bishop, last four figures brought from elsewhere; canopy finished with enriched cornice and pierced parapet with quatrefoils and cusped cresting. 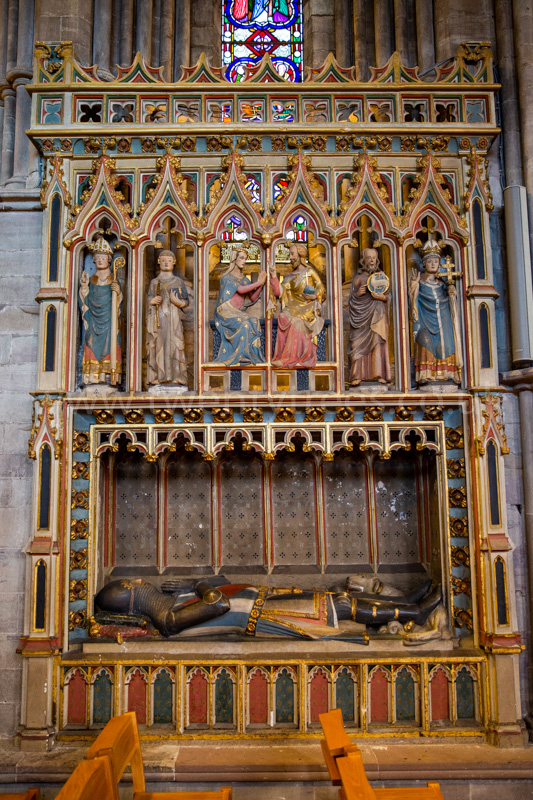 After 10 Jul 1359. Monument to William Greystoke 2nd Baron Greystoke 1321-1359 in St Andrew's Church Greystoke. Camail and Jupon Period. On his head he wears the bascinet with a camail. The jupon under which his coat of chain mail may be seen. His sword belt is low on his jupon, horizontal.

On 26 Jul 1375 Richard Pembridge 1320-1375 (55) died. Hereford Cathedral. Alabaster altar-tomb and effigy, altar-tomb with moulded base and capping, sides and ends panelled with alternate quatrefoils enclosing shields of his arms and trefoil-headed panels; effigy in bascinet, Camail and Jupon Period. His jupon with same arms as his shield. Hip Belt, Leg Garter, right leg modern, head on helm crested with a Feathered Crest, feet on hound. 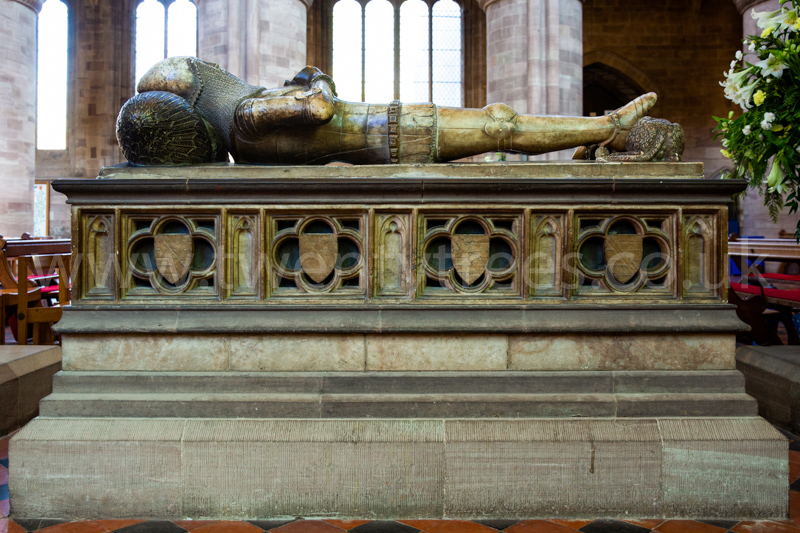 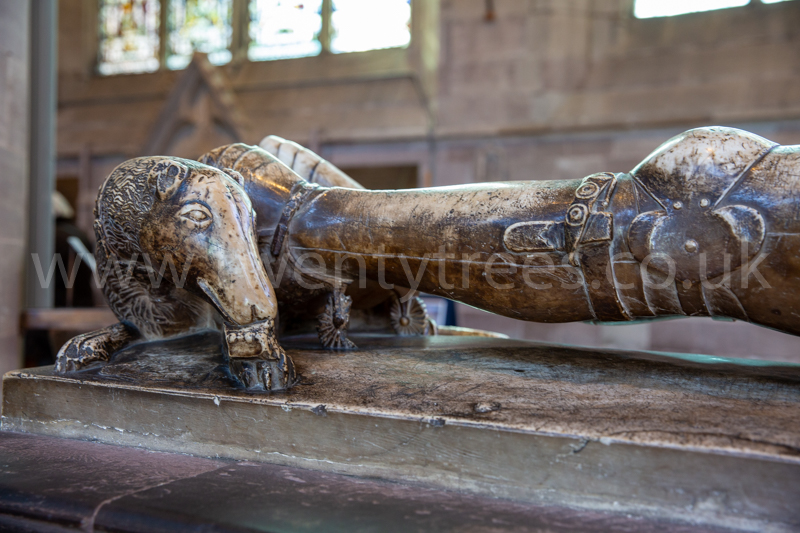 Monument in St Nicholas Church West Tanfield. Camail and Jupon Period. Lancastrian Esses Collar. Hip Belt. Feathered Crest on Great Helm. Angels Supporting Pillow. His bascinet has decorated edges with the camail appearig to attach inside the bascinet. Decorated flat band. She wearing a unusual headress which appears to be a cross between Gabled Headress and Bongrace. Her dress long with a Low Rounded Neckline and appears to be decoated with an armorial: vair at the top, chevrons at the bottom, which may be

Marmion or a variation of.

On 06 Jun 1441 William Phelip 1383-1441 (58) died. He was buried at St Mary's Church Dennington. Monument to William Phelip 1383-1441 (58) and Joan Bardolf 6th Baroness Bardolf 1390-1447 (50). Early Plate Bascinet and Gorget Period. Feathered Crest. Detail of the Wyvern on which her feet rest. Detail of Eagle, possibly hawk, on which his feet rest. Crespine Headress covering her hair. He wearing a bascinet with IHC NASARE Lettering. Both wearing a Lancastrian Esses Collar. Leg Garter below the left knee.

On 12 Mar 1487 William Gascoigne 1452-1487 (35) died at Gawthorpe Hall. All Saints Church Harewood. Monument to William Gascoigne 1452-1487 (35) and Margaret Percy 1447- (40). Fluted Period. Alabaster chest tomb with a fine array of weepers, possibly their children although too many, women one side, nine men the other, one of which appears with angels wings, possible children and spouses. He wearing a Lancastrian Esses Collar with unusual O links. Clean shaved, no bascinet, his head resting on a helm with bulls head crest. His armour plate over which there appears to be, unusually for the period, a tabard.  The left hand side of his face appears disfigured. Possibly a war wound. She wearing the widow's barbe. Note. Gardner describes this monument as being to Sir John Nevill of Womersley, died 1482. Chest with Weepers. Chest with Angels with Rounded Wings holding Shields. Angels Supporting Pillow.

The Early Plate Bascinet Period has similarities with the preceding Camail and Jupon Period. The primary difference being the bascinet being decorated with an orle as a means of further protection.

The armour of the Early Plate Bascinet and Gorget Period was developed after experience in battle had shown the throat vulnerable. A gorget was added, attached to the bascinet, to protect the throat.

Vervelle Cover. Vervelles are pierced rivets on the sides of Bascinets from the temple to the back of the neck by which the Camail was attached. Some bascinets have a decorated Vervelle Covers that hide the rivets.