Around 1400. Window in the Chicheley Chapel at St Andrew's Church Wimpole from the late 14th early 15th Century depicting alliances of the Ufford family (who are thought to have owned the manor of Wimpole before the Chicheleys) and the Plantagenets through the marriage of Ralph Ufford 1302-1346 (98) and Maud Plantagenet Countess Ulster 1310-1377 (90), daughter of Henry Plantagenet 3rd Earl of Leicester 3rd Earl Lancaster 1281-1345 .

From top to bottom, left to right:

Tiptoft. The Tiptoft family owned the nearby manor of Harleston.

Avenell. The Avenell family once held a manor in Wimpole.

Ufford. Believed to be the arms of William Ufford 2nd Earl Suffolk 1338-1382 (61). Note the difference of an annulet argent (white) in the top left corner.

Ufford with a label three points. Believed to be Robert Ufford who predeceased his father Robert Ufford 1st Earl Suffolk 1298-1369.

From an original description by James C Powell 1903. 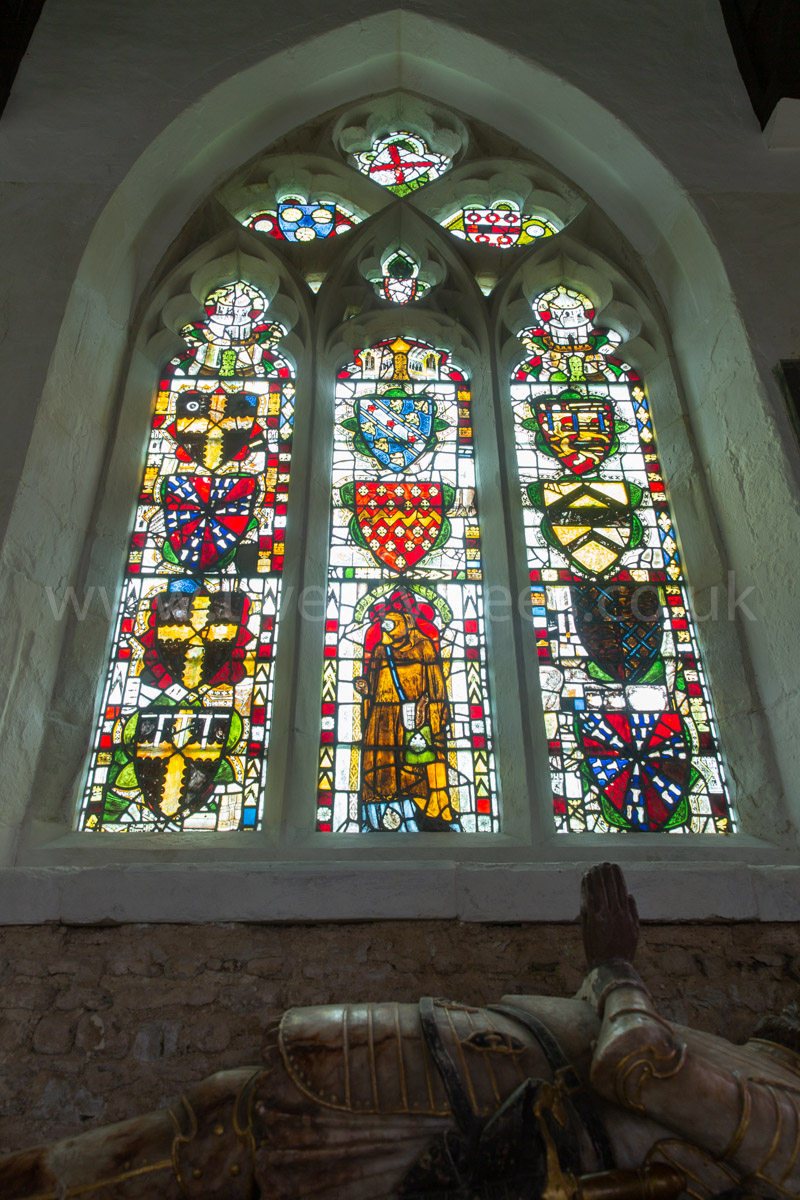 Conway. Sable, on a bend cotised argent a rose gules between two annulets of the first. Source.

Dawnay. Argent on a bend cotised sable three annulets of the field. Source.

Leslie. Argent, on a bend azure three buckles or. Source.

Capet within a bordure gules charged with eight buckles or. Awarded in 1427 by King Charles VII of France. Source.

Castile. Gules a castle or.

Wedding of Henry III and Eleanor of Provence

Chronica Majora 1236 The ceremonies at the marriage of Henry the Third. 19 Jan 1236. There were assembled at the king's (28) nuptial festivities such a host of nobles of both sexes, such numbers of religious men, such crowds of the populace, and such a variety of actors, that London, with its capacious bosom, could scarcely contain them. The whole city was ornamented with flags and banners, chaplets and hangings, candles and lamps, and with wonderful devices and extraordinary representations, and all the roads were cleansed from mud and dirt, sticks, and everything offensive. The citizens, too, went out to meet the king (28) and queen (13), dressed out in their ornaments, and vied with each other in trying the speed of their horses. On the same day, when they left the city for Westminster, to perform the duties of butler to the king (which office belonged to them by right of old, at the coronation), they proceeded thither dressed in silk garments, with mantles worked in gold, and with costly changes of raiment, mounted on valuable horses, glittering with new bits and saddles, and riding in troops arranged in order. They carried with them three hundred and sixty gold and silver cups, preceded by the king's trumpeters and with horns sounding, so that such a wonderful novelty struck all who beheld it with astonishment. The archbishop of Canterbury (61), by the right especially belonging to him, performed the duty of crowning, with the usual solemnities, the bishop of London assisting him as a dean, the other bishops taking their stations according to their rank. In the same way all the abbats, at the head of whom, as was his right, was the abbat of St. Alban's (for as the Protomartyr of England, B. Alban, was the chief of all the martyrs of England, so also was his abbat the chief of all the abbats in rank and dignity), as the authentic privileges of that church set forth. The nobles, too, performed the duties, which, by ancient right and custom, pertained to them at the coronations of kings. In like manner some of the inhabitants of certain cities discharged certain duties which belonged to them by right of their ancestors. The earl of Chester (29) carried the sword of St. Edward, which was called "Curtein", before the king, as a sign that he was earl of the palace, and had by right the power of restraining the king if he should commit an error. The earl was attended by the constable of Chester (44), and kept the people away with a wand when they pressed forward in a disorderly way. The grand marshal of England, the earl of Pembroke (39), carried a wand before the king and cleared the way before him both, in the church and in the banquet-hall, and arranged the banquet and the guests at table. The Wardens of the Cinque Ports carried the pall over the king, supported by four spears, but the claim to this duty was not altogether undisputed. The earl of Leicester (28) supplied the king with water in basins to wash before his meal; the Earl Warrenne performed the duty of king's Cupbearer, supplying the place of the earl of Arundel, because the latter was a youth and not as yet made a belted knight. Master Michael Belet was butler ex officio; the earl of Hereford (32) performed the duties of marshal of the king's household, and William Beauchamp (51) held the station of almoner. The justiciary of the forests arranged the drinking cups on the table at the king's right hand, although he met with some opposition, which however fell to the ground. The citizens of London passed the wine about in all directions, in costly cups, and those of Winchester superintended the cooking of the feast; the rest, according to the ancient statutes, filled their separate stations, or made their claims to do so. And in order that the nuptial festivities might not be clouded by any disputes, saving the right of any one, many things were put up with for the time which they left for decision at a more favourable opportunity. The office of chancellor of England, and all the offices connected with the king, are ordained and assized in the Exchequer. Therefore the chancellor, the chamberlain, the marshal, and the constable, by right of their office, took their seats there, as also did the barons, according to the date of their creation, in the city of London, whereby they each knew his own place. The ceremony was splendid, with the gay dresses of the clergy and knights who were present. The abbat of Westminster sprinkled the holy water, and the treasurer, acting the part of sub-dean, carried the Paten. Why should I describe all those persons who reverently ministered in the church to God as was their duty? Why describe the abundance of meats and dishes on the table & the quantity of venison, the variety of fish, the joyous sounds of the glee-men, and the gaiety of the waiters? Whatever the world could afford to create pleasure and magnificence was there brought together from every quarter.

Clotworthy. Azure, a chevron ermine between three chaplets or. Source.

Morrison. Or, on a chief gules three chaplets of the first. Source.

Beaumont. Chequy or and azure a chevron ermine. Source.

Chichester. Chequy or and gules, a chief vair. Source.

Clifford. Chequy or and azure, a fess gules. Source.

Vaux. Chequy argent and gules, on a chevron azure, three roses or. Source.

Warenne. Chequy or and azure. Source.

Hornby. Or, two chevronels between three bugle-horns sable stringed gules on a chief of the second as many eagle's legs erased of the first. Source.

Clarion. Unclear as to origin. Possibly a spear rest?.

Saxe Coburg Gotha. Barry of ten sable and or, a crancelin vert, Source.

Delve. A sod of earth.

Stourton. Sable, a bend or between six fountains. Source.

Fret. Two narrow bendlets placed in saltire, and interlaced with a mascle. A fishing-net?.

Fretty. A continuous fret, and forms a pattern for diapering the field, or some ordinary.

Dutton. Quarterly argent and gules, in the 2&3 a fret or. Source.

Verdun. Or, a fret gules.

Cosin. Azure, a fret or.

Garb. A wheat-sheaf. When a sheaf of any other grain is borne the name of the grain must be expressed. When the stalks are of one tincture and the ears of another, the term eared must be used.

Cholmondeley. Gules, in chief two esquire's helmets argent in base a garb or. Source.

Grosvenor. Azure a garb or. Source.

Grozing Irons. A pair of pliers for clipping the edges of pieces of glass.

Brunswick Luneburg. Per pale, I gules two lions passant guardant or (for Brunswick), II or a semy of hearts gules a lion rampant azure (for Lunenburg).

Lozenge. Lozenges are frequently conjoined in the form of ordinaries, and in all such cases the number of the lozenges should be given.

Feilding. Argent, on a fess azure three lozenges or. Source.

Maunch. A sleeve of the type typically worn in the 13th and 14th Centuries.

Conyers. Azure, a maunch or. Source.

Mascle is a diamond shape.

Fret. Two narrow bendlets placed in saltire, and interlaced with a mascle. A fishing-net?.

Morion Cap. A cap made of steel usually worn by foot soldiers.

Sidney. Or, a pheon azure.

Hobart. Sable, an estoile of six points or between two flaunches ermine.

Robartes. Azure, three estoiles and a chief wavy or. Source.

Water Bougets. A yoke with two large skins appended to it, formerly used for the conveyance of water to an army.