Chest with Angels with Rounded Wings

After 1488. All Saints Church Youlgreave. Monument to Thomas Cockayne 1451-1488. An unusual monument insofar as it half-life sized apparently as a result of his dying before his father. Fluted Period. Suns and Roses Collar. Cockayne Cockerel Crest. Chest with Angels with Rounded Wings. Chest with Weepers holding Shields.

Monument to Thomas Babington 1449-1518 (69) and Editha Fitzherbert 1457-1511 (61). Excellent painted alabaster. Monument of the Tudor Period with the colours much refreshed. He in civilian clothes with a purse (aka scrip aka gypciere) hanging from his belt. Dogs chewing at her dress. Gabled Headress. The chest tomb of exceptional quality with the fifteen weepers under Crocketed canopies broadly undamaged. The weepers are believed to represent Thomas and Editha's children and their respective spouses. The chest tomb now abuts the south wall of the chancel meaning only three sides visible. Carved by Harpur and Moorecock of Burton on Trent. 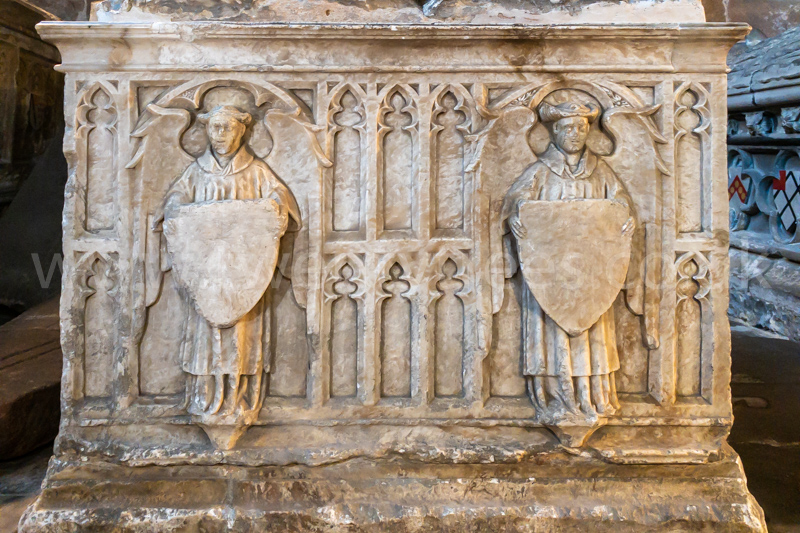 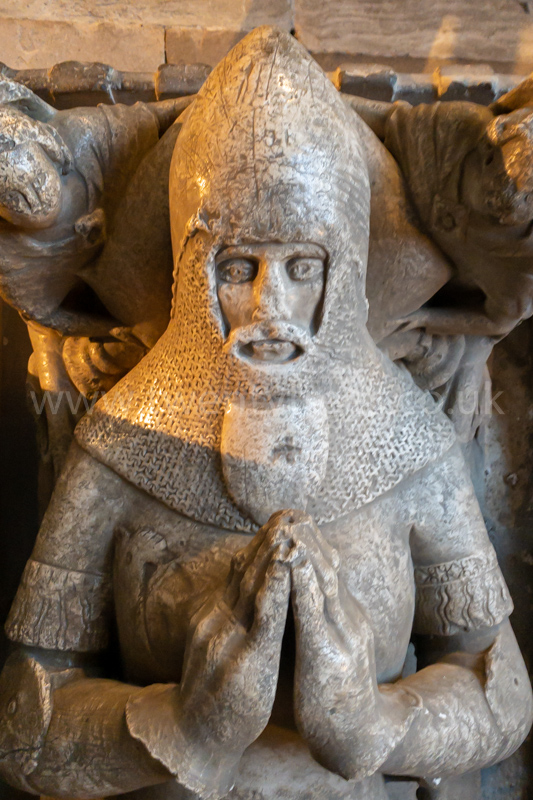 After 12 Oct 1477. Church of St John The Baptist Kinlet. Monument to Humphrey Blount 1421-1477 and Elizabeth Winnington. Fluted Period. He wearing a Suns and Roses Collar. She wearing a fine Horned Headdress with large flap as also detailed in the weepers. Dress Folds at Feet. Dogs chewing at her dress with Studded Collar. Chest with Weepers holding Shields.

On 20 Oct 1490 Elizabeth Marshall 1437-1490 (53) died. She was buried at Church of St Barlok Norbury.
Monument to Ralph and Elizabeth. Finely made in Chellaston alabaster of the Fluted Period. His effigy notable for being the only remaining with the Yorkist Boar Pendant (boar of Richard III) on his Suns and Roses Collar. Bobbed hair with finely detailed ringlets. No facial hair. The chest finely made with weepers on the three extant sides. On one side five single men (a knight, a monk, two merchants and one unknown), and one couple. On the other side women, four single, two duos. Ralph and Elizabeth had twelve children, six male, six female so probable the weepers represent their children, possibly with spouses, possibly with offspring since in the two females duos there is a noticeable difference in height. Suns and Roses Collar. Fine Sabatons, the armoured feet, with spurs. Note the Bedesman under the right foot. Unlikely the sculptor had ever seen a lion. Feet resting on a Lion. The Fitzherbert Clenched Fist Crest. A finely carved Horned Headdress. A finely carved collar with Mary and baby Jesus pendant. A Bedesman looking somewhat bored. Excellent weepers on all sides, probably their issue, possibly with grandchildren, on the longer sides since they had six boys and six girls. Possibly Harpur and Moorecock of Burton on Trent. Swirling Tail. Chunky Lions Mane. Chest with Weepers holding Shields.

After 1488. All Saints Church Youlgreave. Monument to Thomas Cockayne 1451-1488. An unusual monument insofar as it half-life sized apparently as a result of his dying before his father. Fluted Period. Suns and Roses Collar. Cockayne Cockerel Crest. Chest with Angels with Rounded Wings. Chest with Weepers holding Shields.

On 27 Jul 1571 Francis Shirley 1515-1571 (56) died at Staunton Harold. He was buried in the Church of St Mary and St Hardulph Breedon on the Hill. Elizabethan Period. Chest with Weepers holding Shields. Helm with Folds. Richard and Gabriel Royley of Burton upon Trent.

On 17 Apr 1581 Humphrey Bradbourne 1524-1581 (57) died. Monument in St Oswalds Church Ashbourne. Around the sides of the tomb their six sons and four daughters. The tomb sculpted by Richard and Gabriel Royley of Burton upon Trent. Chest with Weepers holding Shields. Dress Folds at Feet. Ruffs. 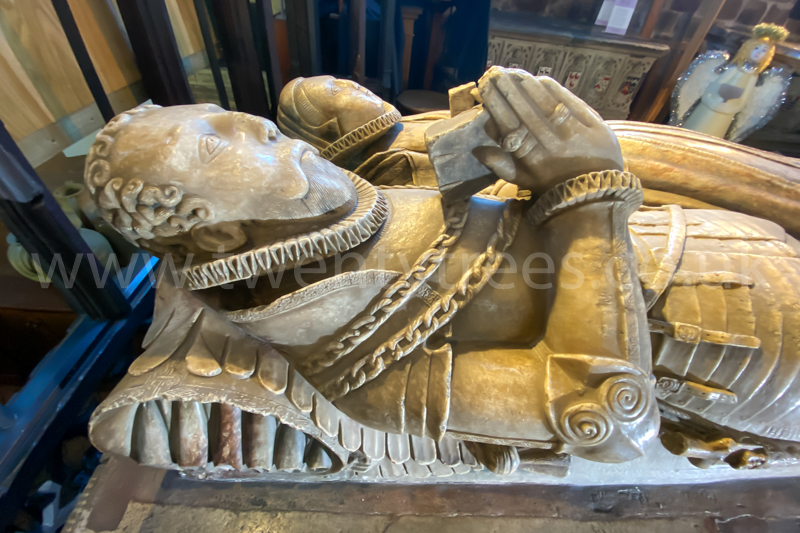 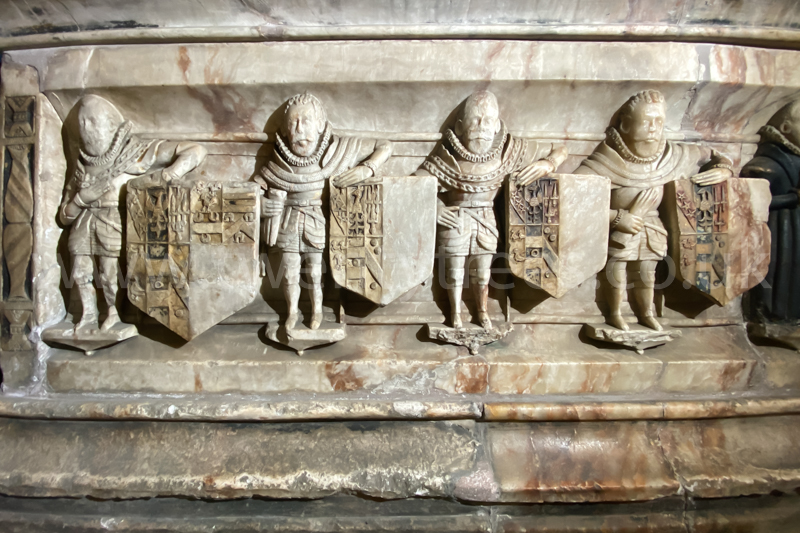 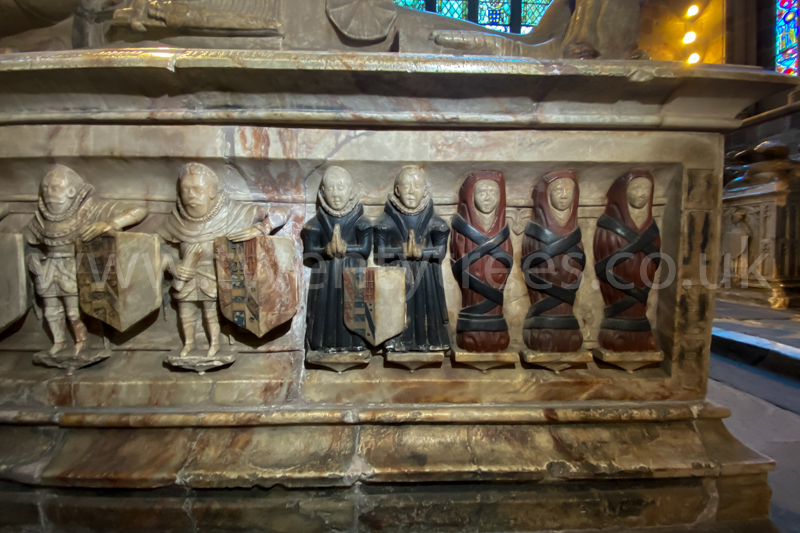 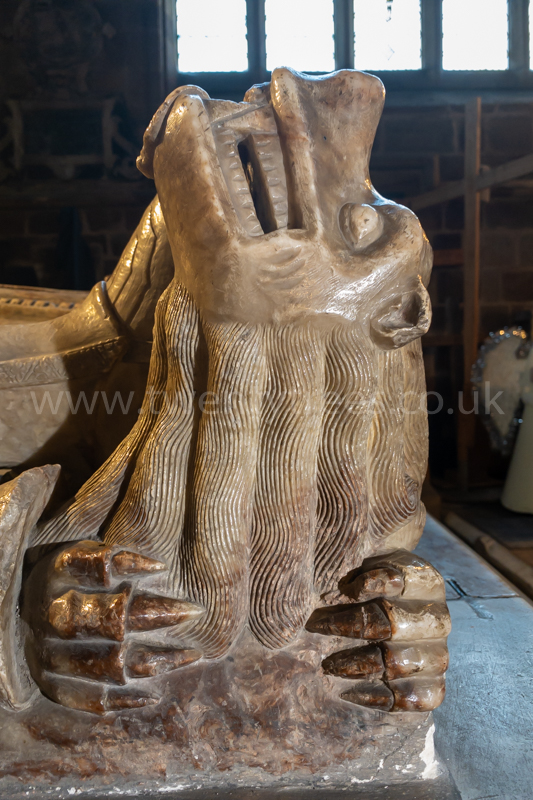 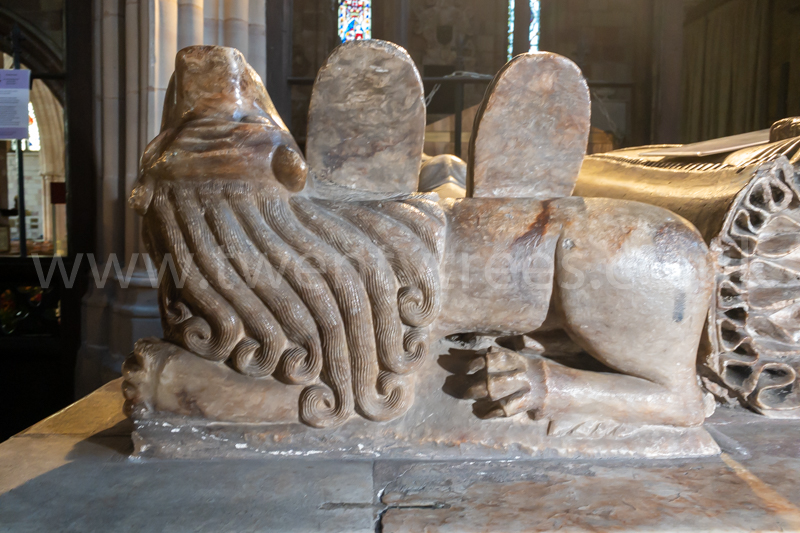 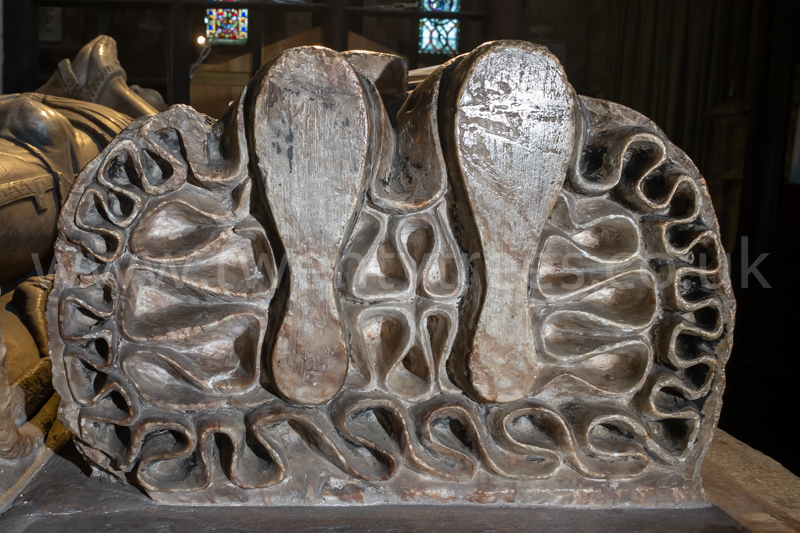 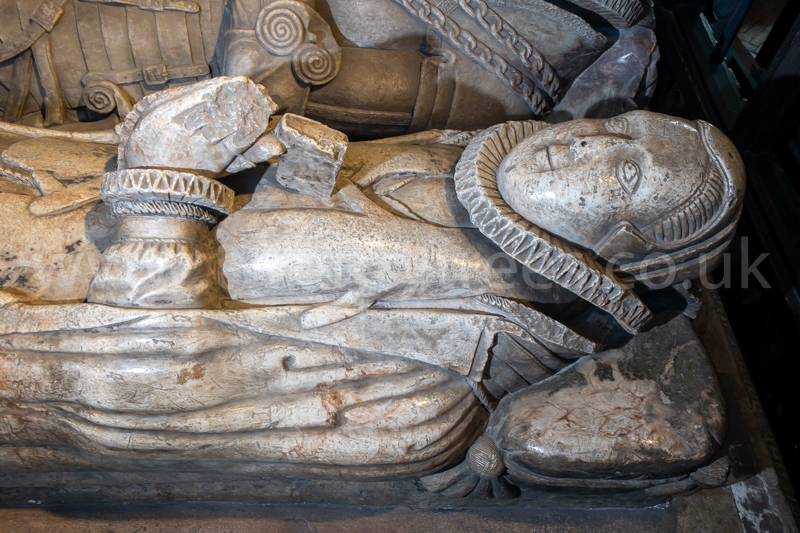 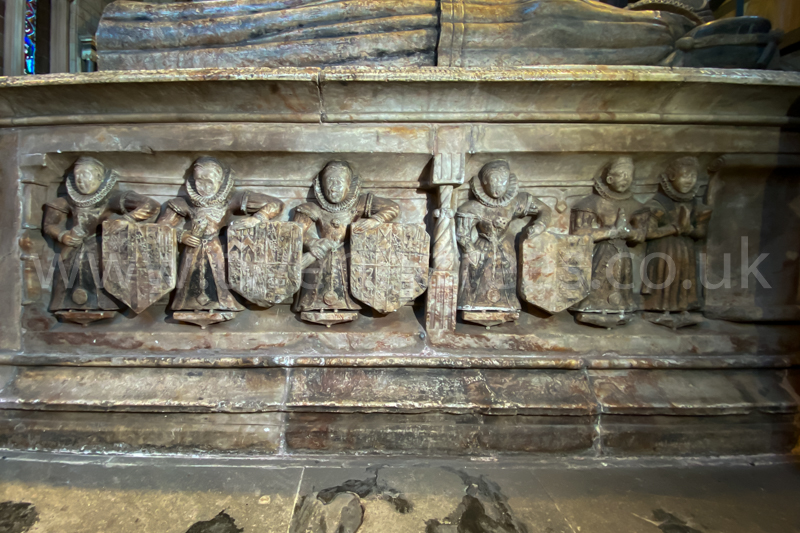