Before 1260 . The Early Medieval Period Period describes knights wearing a single piece of Chain Mail that covered the head, torso, arms and legs to the knees. Commonly associated with Crusader knights. There are theories crossed-legs mean the knight had been on Crusade, the number of times described by whether the legs are crossed at the ankles, the calves or the knees. None of these theories appear consistent with the extant examples. There are further theories about whether the meaning of Crossed Legs being crossed Right Leg over Left or vice-verse. These, also, do not appear consistent with extant examples. 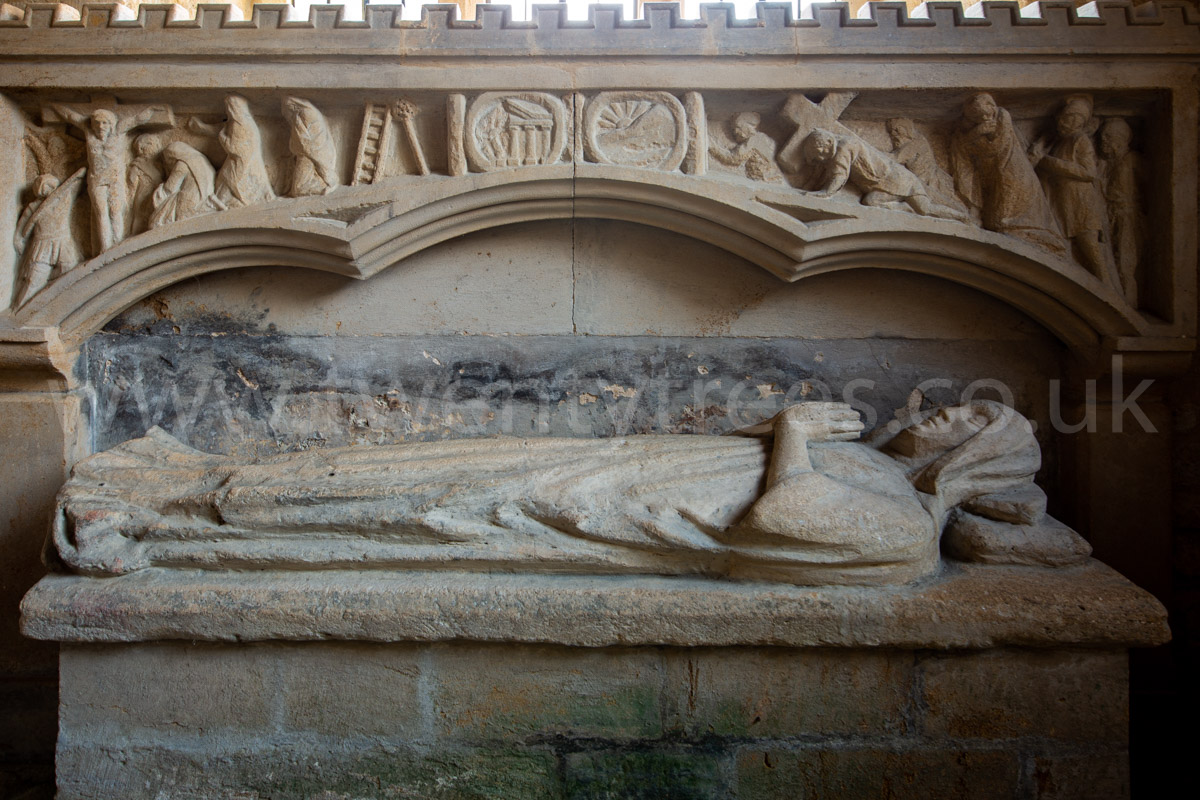 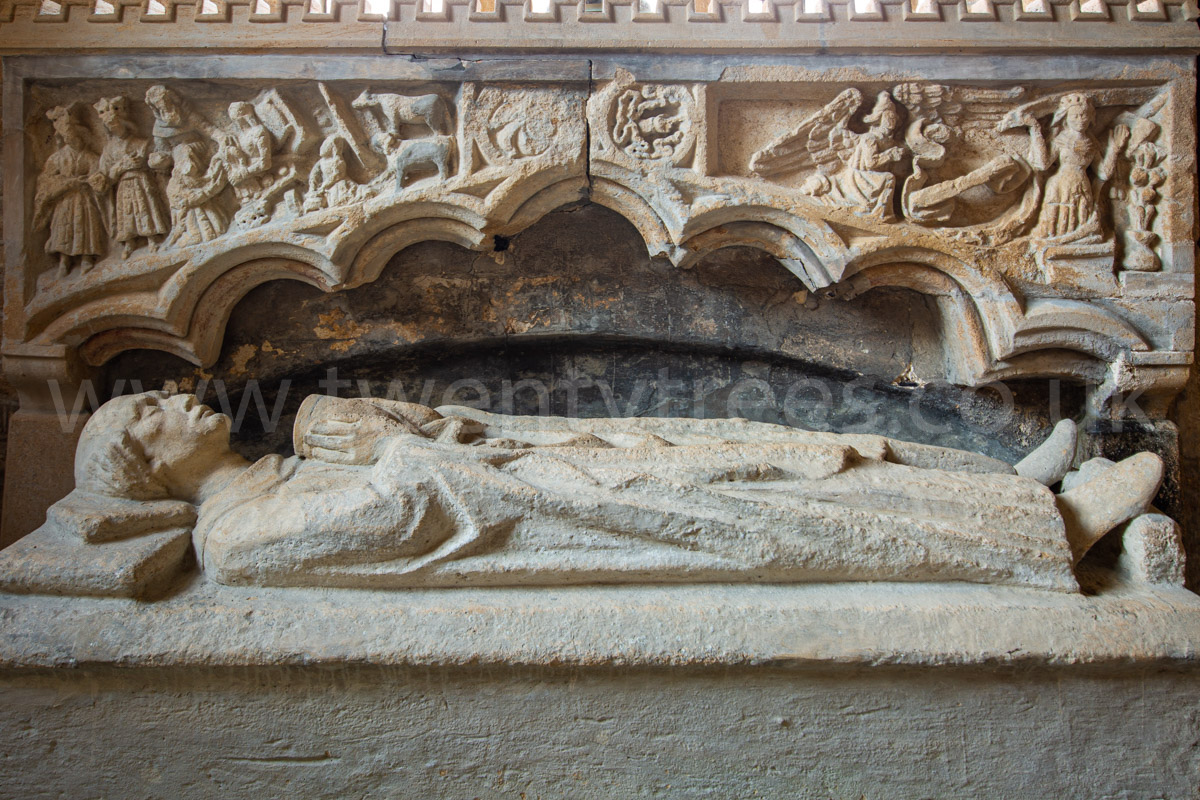 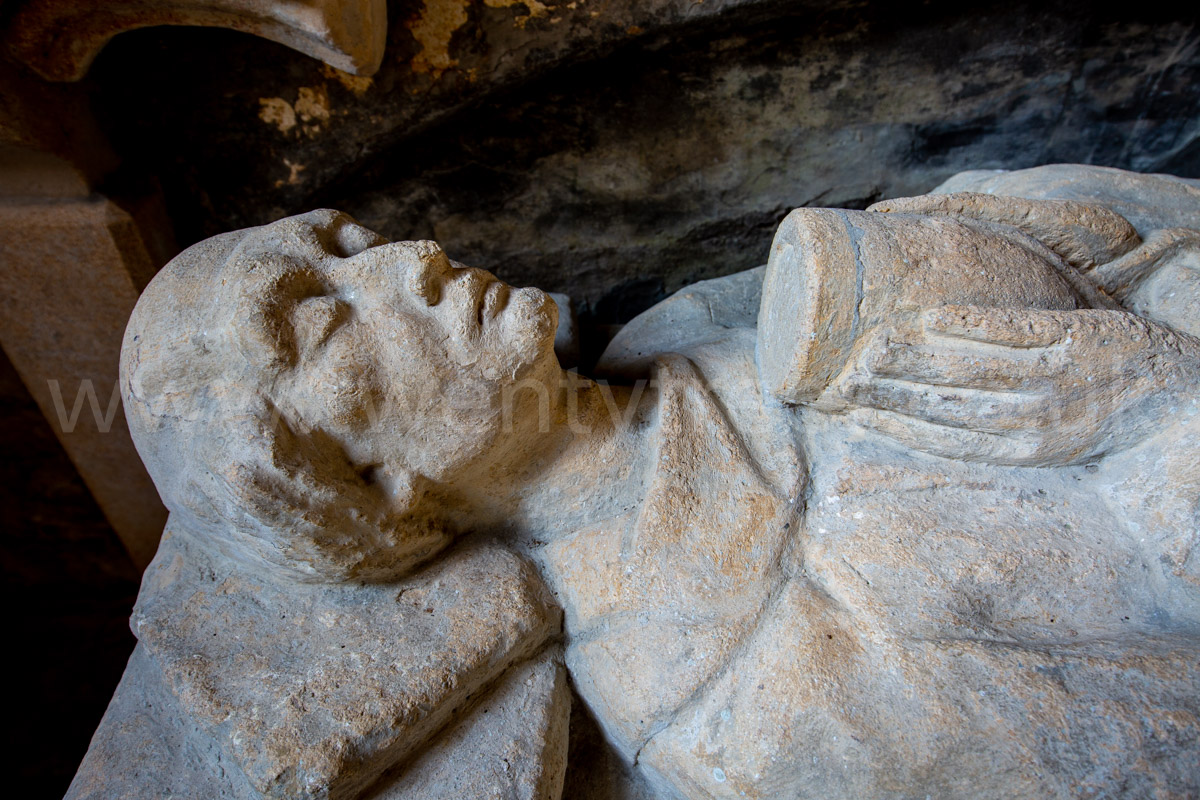 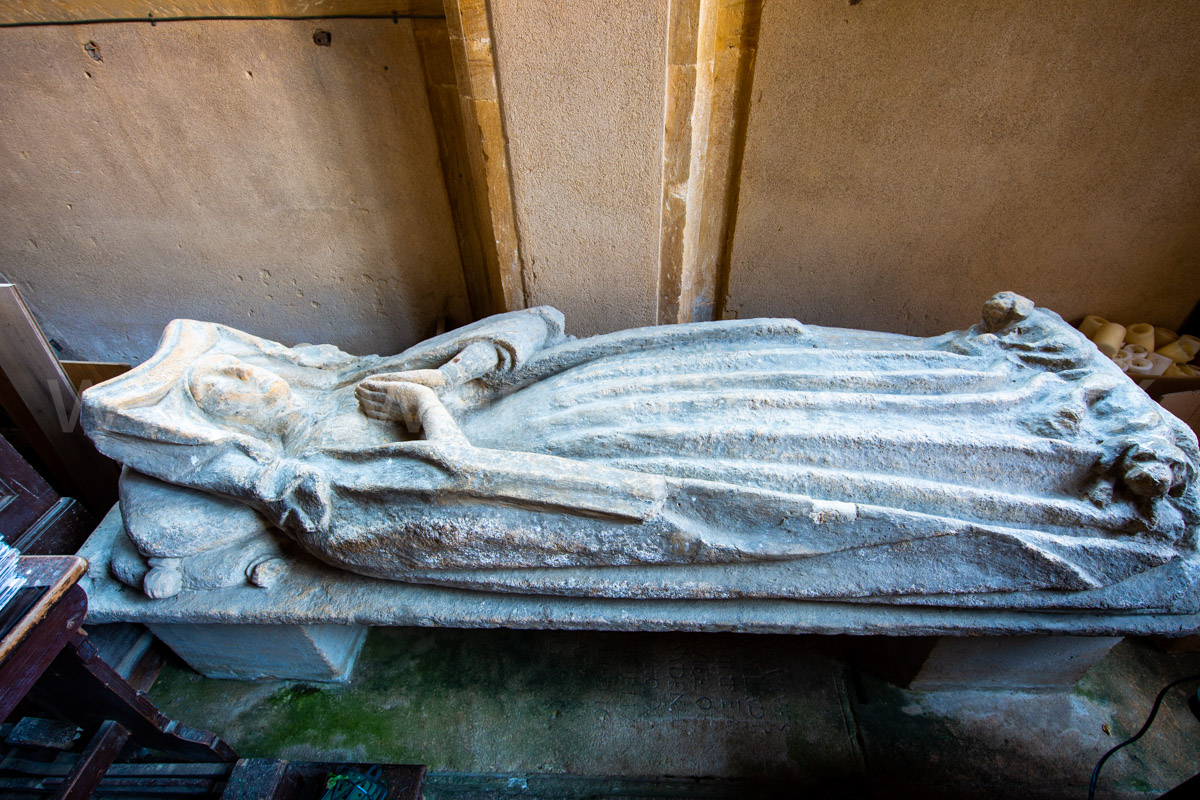 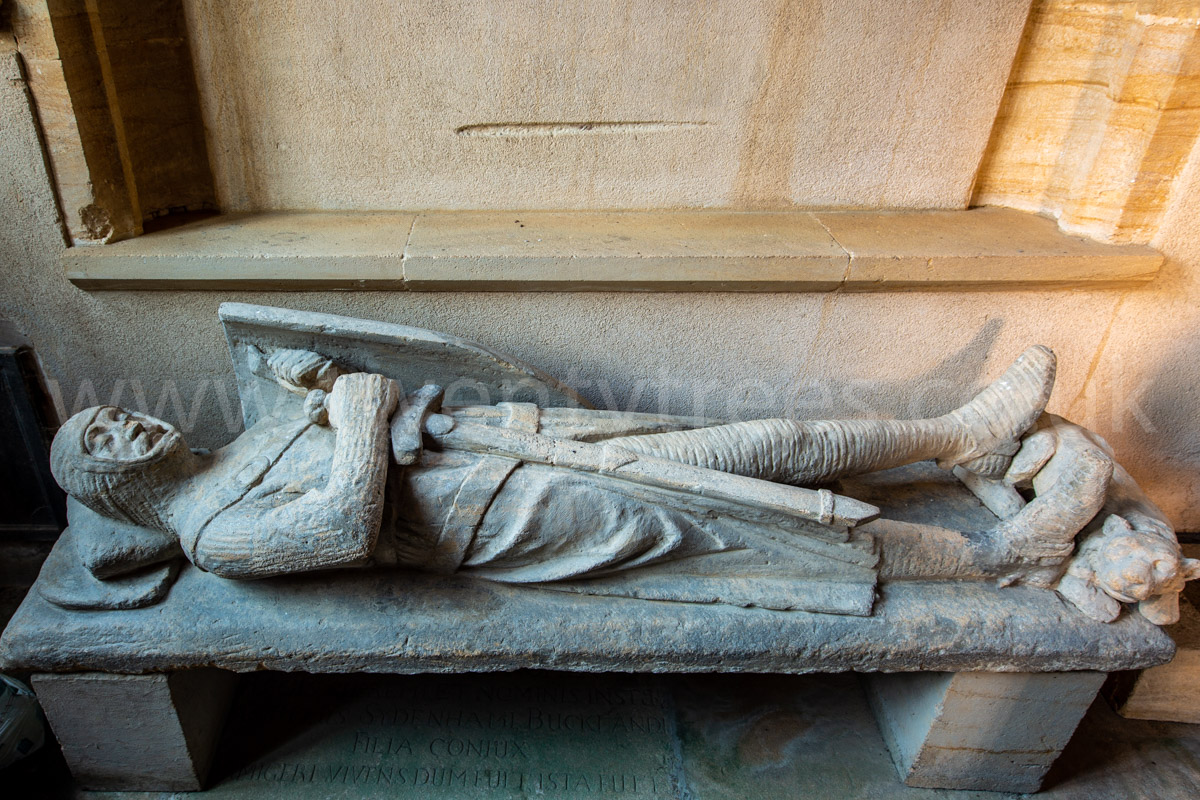 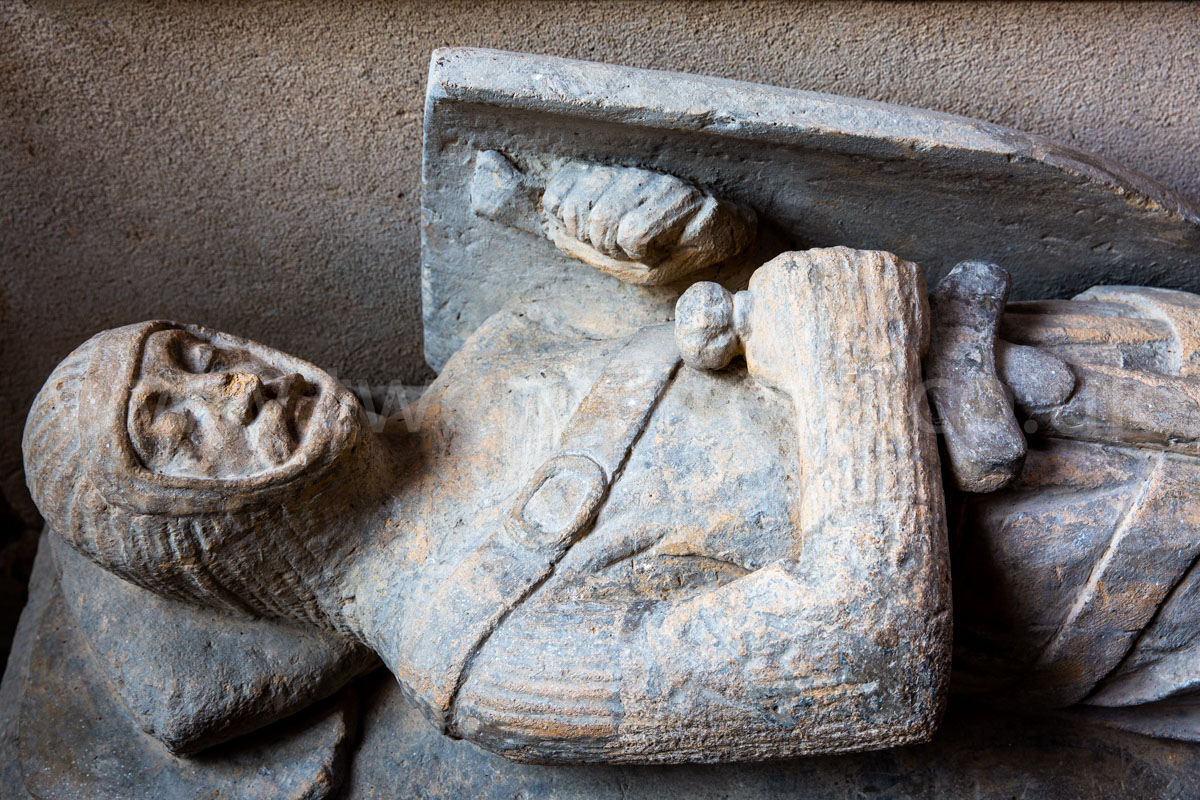 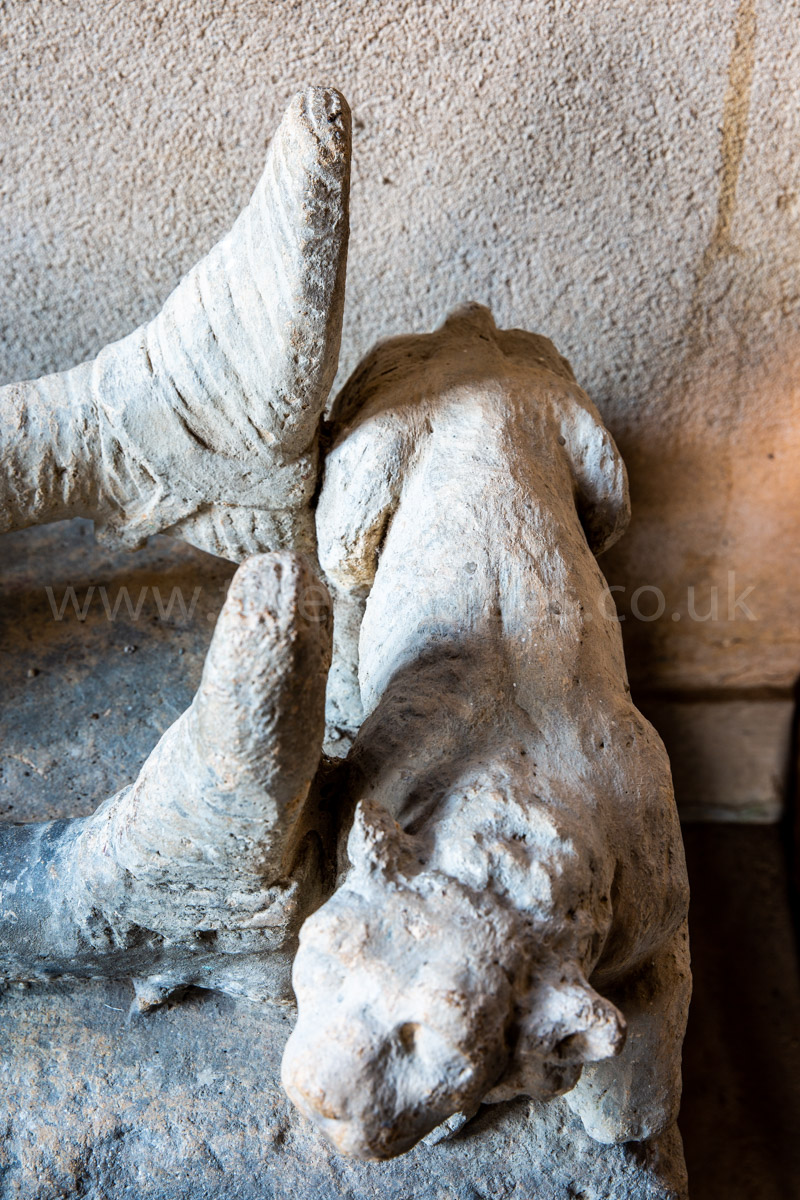 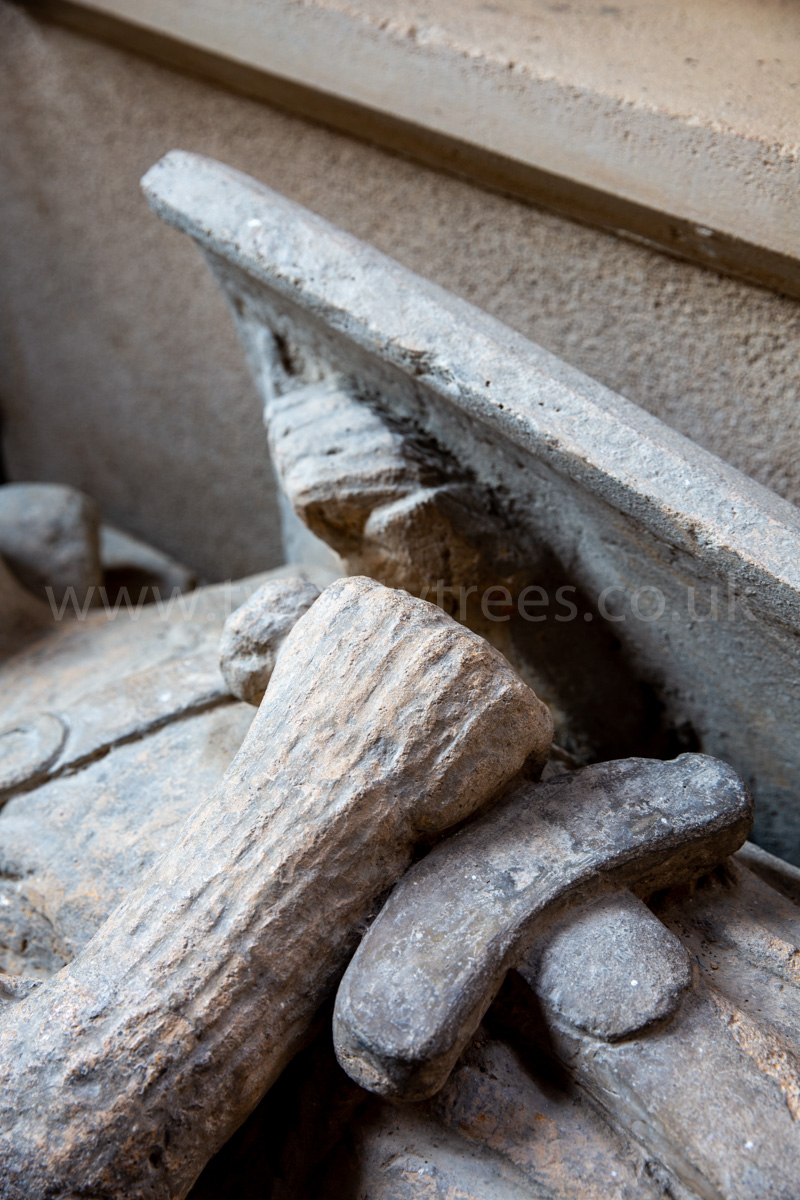 Pershore Abbey. Early Medieval. Monument possibly to William de Harley. Left Leg Over Right. Sword in Left Hand. Holding a horn in his right hand. Fine band around his head. Head on single cushion.
Detailed description from Mark Downing of the Church Monuments Society posted to Facebook; abridged:
This limestone effigy lies flat on its back on a stone coffin, and is positioned in the middle of the south transept. The legs are missing below the knees. The figure is represented cross-legged (left over right). Below the head is a single rectangular cushion.
It wears a mail hauberk, mitten gauntlets and a coif all made in one. There is a cord around the head, above the face-opening, passing through rings of mail at wide intervals. A triangular flap which can be seen on the left side of the neck, represents the part of the mail coif called a ventail. This was a flap of mail drawn across the mouth to close the face-opening, and was secured to the temple either by a strap and buckle, or by a knotted cord. The mail of the armour is rendered by parallel rows of C’s, alternate rows having the curves lying in the opposite directions. The rows of mail run around the coif, arms and hauberk. The left arm is partially concealed underneath the shield with the palm of the hand resting on top of the pommel of the sword. The right hand is bare, with the mitten-gauntlet off the hand, hanging loose around the wrist. The hand is holding a hunting horn at hip level, which has a strap passing through the lower-ring of a figure eight terminal. This strap is then attached around the horn at its rear and centre. Attached to the upper ring of the terminal is a loose strap which may have been used to suspend the horn from either the sword-belt or a baldric, the loose end falling underneath the hand.
Clearly shown within the opening of the gown, beneath the arm is an additional underlying body-defence. This almost certainly represents a coat of plates, joined together at the side by three straps with rectangular buckles, the straps emerging from within the upper-breast: the rivets would have been painted on. An effigy in the Temple church, London, is wearing a similar plate defence. The coat of plates consisted of a poncho-like garment with either a solid breast-plate sewn into it, or a series of metal plates attached by rivets to a textile cover. Visible at the neck, in the aperture of the coif, is a smooth garment. Presumably this represents the upper-chest portion of the coat of plates described above.
Worn over the coat of plates is a long sleeveless gown reaching to the calf, with the front open in the usual V-fashion. On the left arm, suspended from a guige which passes diagonally across the chest and over the right shoulder, is a long kite-shaped shield, which is concave towards the body. The shield is plain with no traces of heraldry present. Biting the tip of the shield is a damaged creature, possibly a griffin, dragon or wyvern.
The sword belt which has a square buckle is decorated with I-shaped bars, having a circular boss in their centres. The belt is attached to the scabbard by a single band. The loose portion of the belt falls to the thigh. The pommel of the sword is virtually concealed by the left hand. The grip is of medium length and the remains of the right quillon is worn. The sword, in its scabbard, lies at an angle on the left side of the figure, its tip broken.
Covering the knees and the lower part of the legs are mail hose. The mail represented in the same manner as on the coif and arms. Shown below the left knee is a strap, intended to stop the mail sagging down the leg.
Unfortunately the effigy has been damaged and has lost the lower part of the legs. A drawing by Thomas Dingley in the seventeenth century shows the effigy complete with an animal resting below the feet. The drawing also shows that originally stiff-leaf foliage was represented running along the right-hand edge of the slab, similar to that of William Longespèe ob.1227 (Wiltshire) Salisbury Cathedral.

In 1838 the effigy was found buried on the north side of the church, with the stone coffin placed beneath it. Thomas Habington recorded the effigy on the north side of the quire, also with a hare at his feet which is now missing.
As previously mentioned a serpent or dragon is biting the point of the shield. The theory as to why these creatures are represented on monuments is not fully understood, but may derive from Psalm 91, v. 13. ‘Thou shalt tread upon the lion and adder: the young lion and the dragon, shalt thou trample under foot’. These type of creatures are found on effigies in the North-East of England, for example at Egglesclffe, (Durham), Fountains Abbey c.1325 and Bainton c.1320-40, (both Yorkshire). It must be remarked that the Pershore effigy is not related to the examples found in the North-East as can be observed on stylistic grounds. Lawrence Stone remarks on a Westminster-Lincoln stylistic connection which may carry some weight, but as the effigy is so singular it is very difficult to attribute it to any single group. However the upper-drapery is not too dissimilar to work at Worcester Cathedral (q.v.), and Alfred C. Fryer has attributed both Worcester (1) and Pershore to the ‘Bristol Workshop’.
A very unusual feature is the presence of a horn which is held in the right hand. Other effigies known to the writer where horns are represented can be seen for instance at: Glinton (Northamptonshire) c.1300-1325, Newland (Gloucestershire) c.1457, Skegby, (Nottinghamshire) c.1300 and Wadworth (Yorkshire), c.1300, all are dressed in civilian clothes whereas the Pershore effigy is represented in armour. The reason why the Pershore effigy is represented with a horn is open to at least two theories. The traditional belief is that he was a forest ranger or warden of the Kings forest. The second is that he held land by the horn, ‘horngeld’. A splendid medieval oliphant horn known as ‘The Savernake Horn’ is preserved in the British Museum, London, which has silver enamelled mounts decorated with hunting dogs, forest animals, a seated King, a bishop and a forester. It is thought to have once belonged to the Sturmy family who were hereditary wardens of the Savernake forest from the early twelfth century until the first quarter of the fifteenth century and would add most weight to the theory of the Pershore effigy being a forest warden. 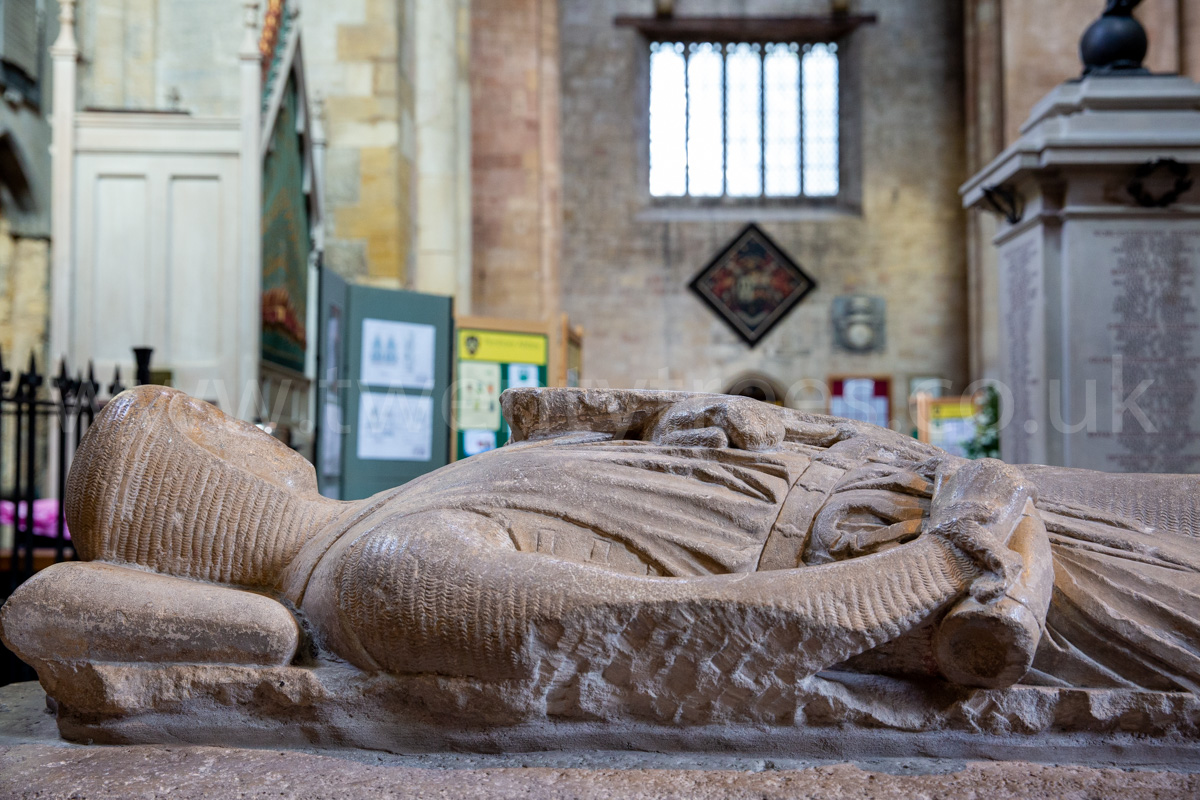 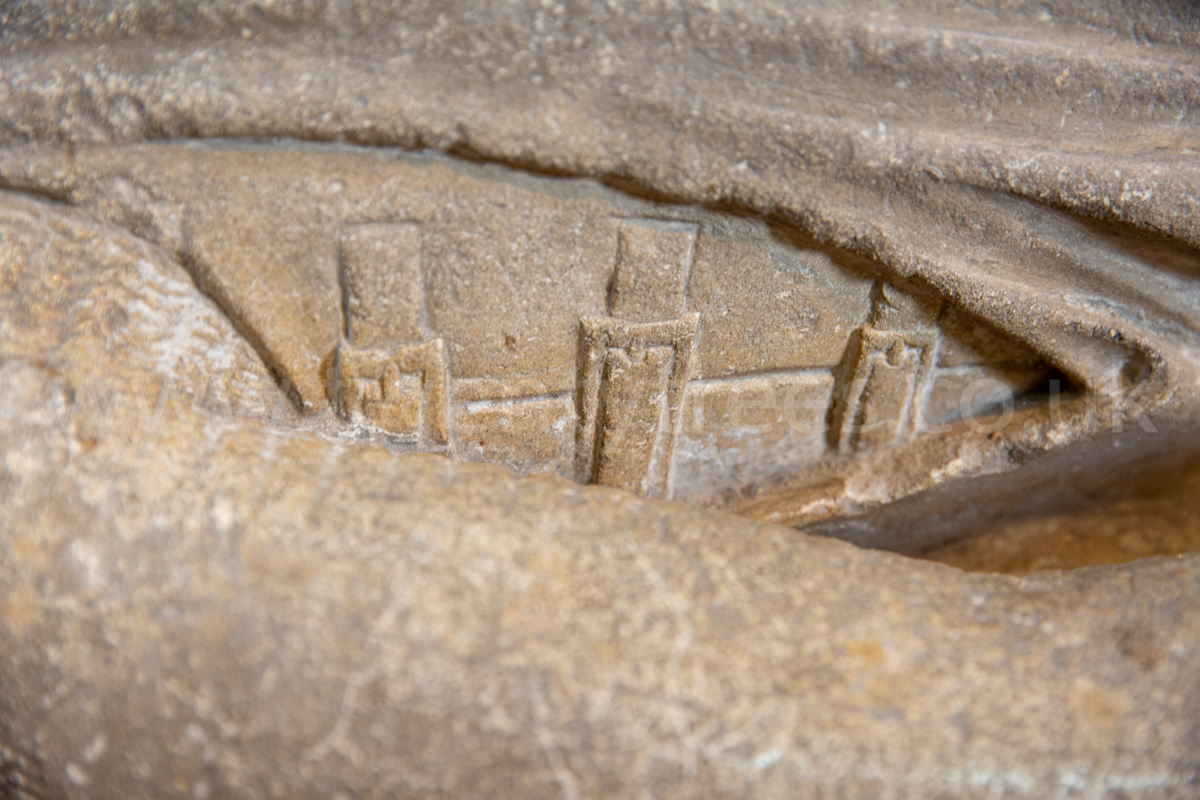 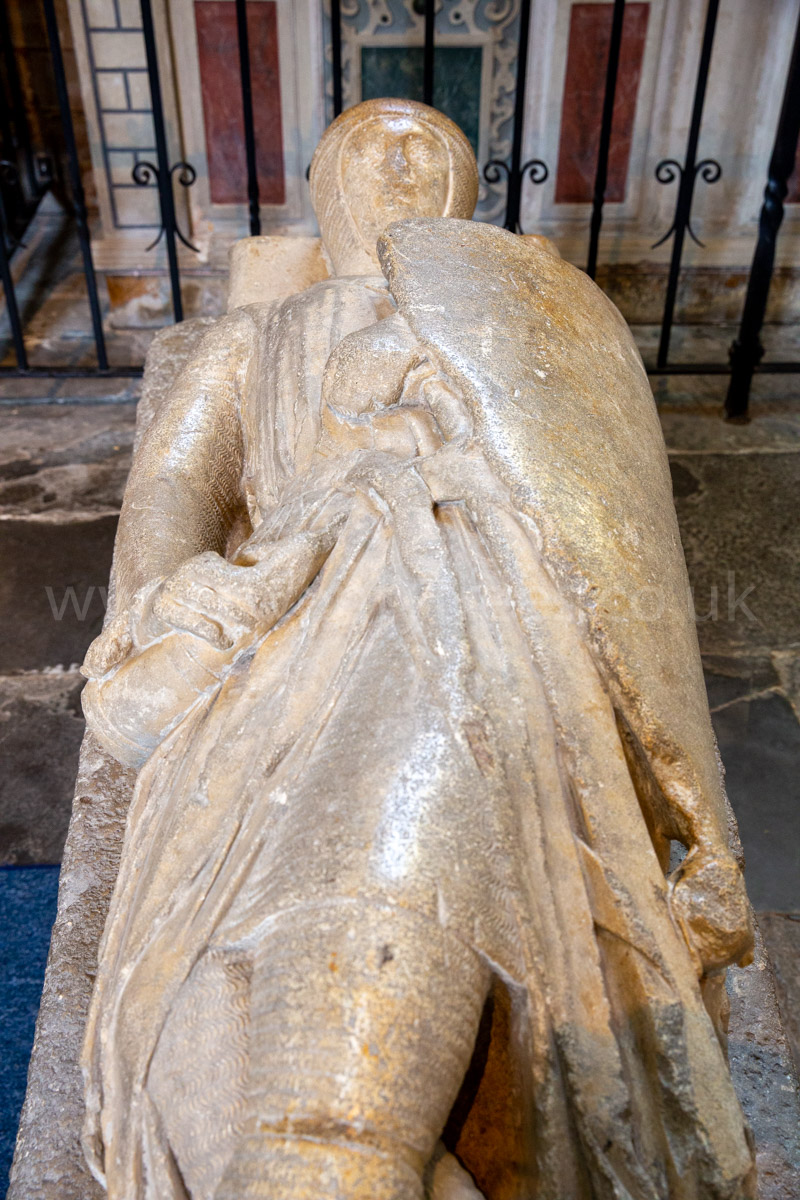