May 1611 Creation of Baronets

Before 1631. Unknown Painter. Portrait of Thomas 1st Baronet Mansel 1556-1631 and Jane Pole. Unusual for showing the couple holding hands. Sir Thomas was one of the richest and most influential people in south Wales. Not only had he acted as MP and Sheriff of Glamorgan on several occasions, he had been knighted, and in 1611 became one of the first ever to be given the title Baronet - see May 1611 Creation of Baronets. Sir Thomas wears a white doublet with delicate lace collars and cuff, and a dark tunic intricately embroidered with gold. These were not his everyday clothes, but would have been chosen especially for the portrait, to demonstrate his wealth and taste. Beards were considered a sign of virility, and were important fashion statements for men. Thomas Mansel wears his long and squared. Lady Jane wears a dark dress embroidered with gold and an elaborate lace collar and headdress, offset by a lavish triple-string of pearls. This was an age when new fashions and luxury materials like lace were being imported from abroad. Her costume was not of the latest fashion, and suggests the taste of an older generation. Lady Jane holds a marigold, also called Mary's Gold. This may be a reference to their daughter Mary, who appears with her parents in another, almost identical portrait. Marigolds were often used to symbolise grief and comfort, so it may also refer to the death of Jane's second husband. 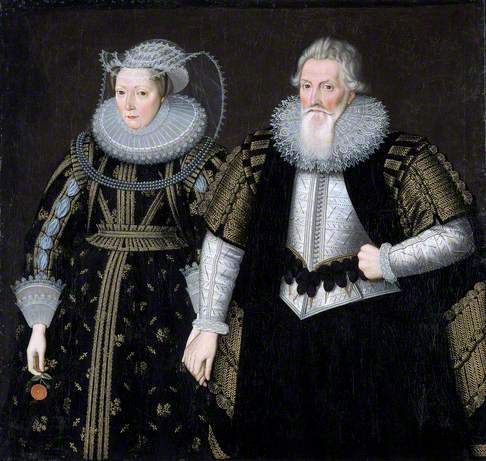