Hesiod's Works and Days is in Hesiod's Books.

Hesiod's Works and Days Lines 1 to 10

Muses of Pieria who give glory through song, come hither, tell of Zeus your father and chant his praise. Through him mortal men are famed or unfamed, sung or unsung alike, as great Zeus wills. [5] For easily he makes strong, and easily he brings the strong man low; easily he humbles the proud and raises the obscure, and easily he straightens the crooked and blasts the proud,—Zeus who thunders aloft and has his dwelling most high. Attend thou with eye and ear, and make judgements straight with righteousness. [10] And, Perses, I would tell of true things.

So, after all, there was not one kind of Strife alone, but all over the earth there are two. As for the one, a man would praise her when he came to understand her; but the other is blameworthy: and they are wholly different in nature. For one fosters evil war and battle, being cruel: [15] her no man loves; but perforce, through the will of the deathless gods, men pay harsh Strife her honor due. But the other is the elder daughter of dark Night, and the son of Cronos who sits above and dwells in the aether, set her in the roots of the earth: and she is far kinder to men. [20] She stirs up even the shiftless to toil; for a man grows eager to work when he considers his neighbor, a rich man who hastens to plough and plant and put his house in good order; and neighbor vies with his neighbor as he hurries after wealth. This Strife is wholesome for men. [25] And potter is angry with potter, and craftsman with craftsman, and beggar is jealous of beggar, and minstrel of minstrel. Perses, lay up these things in your heart, and do not let that Strife who delights in mischief hold your heart back from work, while you peep and peer and listen to the wrangles of the court-house. [30] Little concern has he with quarrels and courts who has not a year's victuals laid up betimes, even that which the earth bears, Demeter's grain. When you have got plenty of that, you can raise disputes and strive to get another's goods. But you shall have no second chance [35] to deal so again: nay, let us settle our dispute here with true judgement which is of Zeus and is perfect. For we had already divided our inheritance, but you seized the greater share and carried it off, greatly swelling the glory of our bribe-swallowing lords who love to judge such a cause as this. [40] Fools! They know not how much more the half is than the whole, nor what great advantage there is in mallow and asphodel.

For the gods keep hidden from men the means of life. Else you would easily do work enough in a day to supply you for a full year even without working; [45] soon would you put away your rudder over the smoke, and the fields worked by ox and sturdy mule would run to waste. But Zeus in the anger of his heart hid it, because Prometheus the crafty deceived him; therefore he planned sorrow and mischief against men. [50] He hid fire; but that the noble son of Iapetus stole again for men from Zeus the counsellor in a hollow fennel-stalk, so that Zeus who delights in thunder did not see it. But afterwards Zeus who gathers the clouds said to him in anger: "Son of Iapetus, surpassing all in cunning, [55] you are glad that you have outwitted me and stolen fire—a great plague to you yourself and to men that shall be. But I will give men as the price for fire an evil thing in which they may all be glad of heart while they embrace their own destruction." 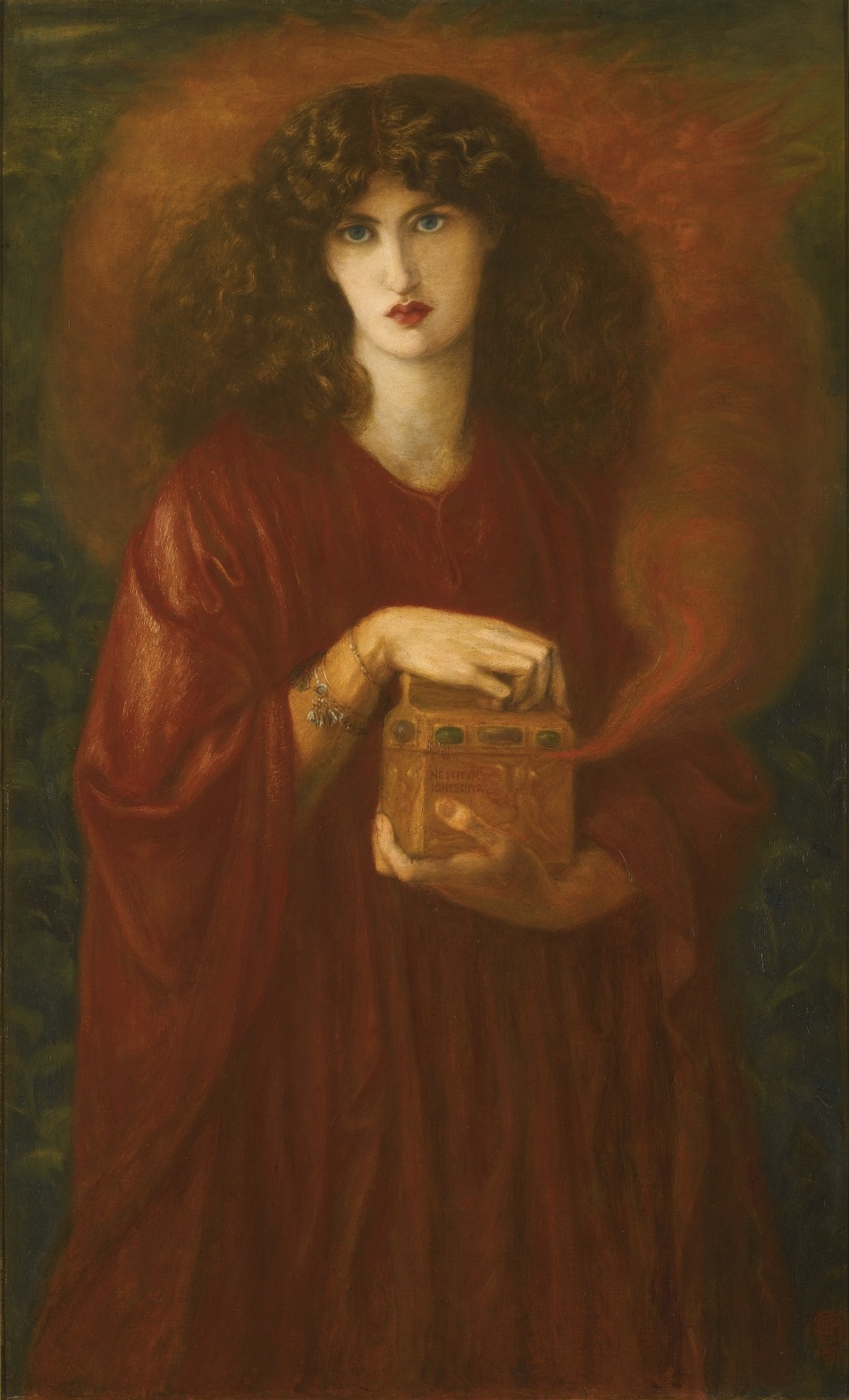 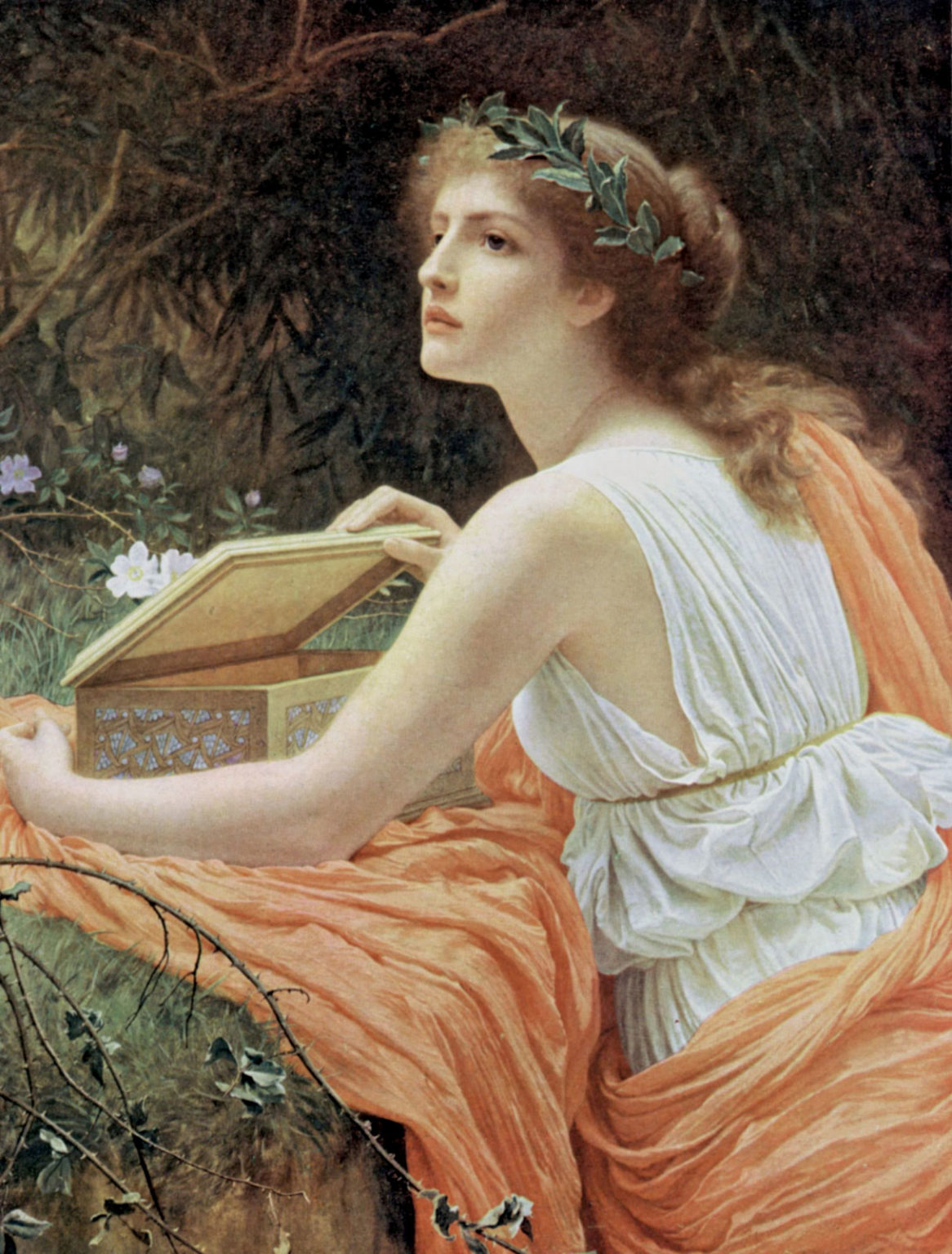 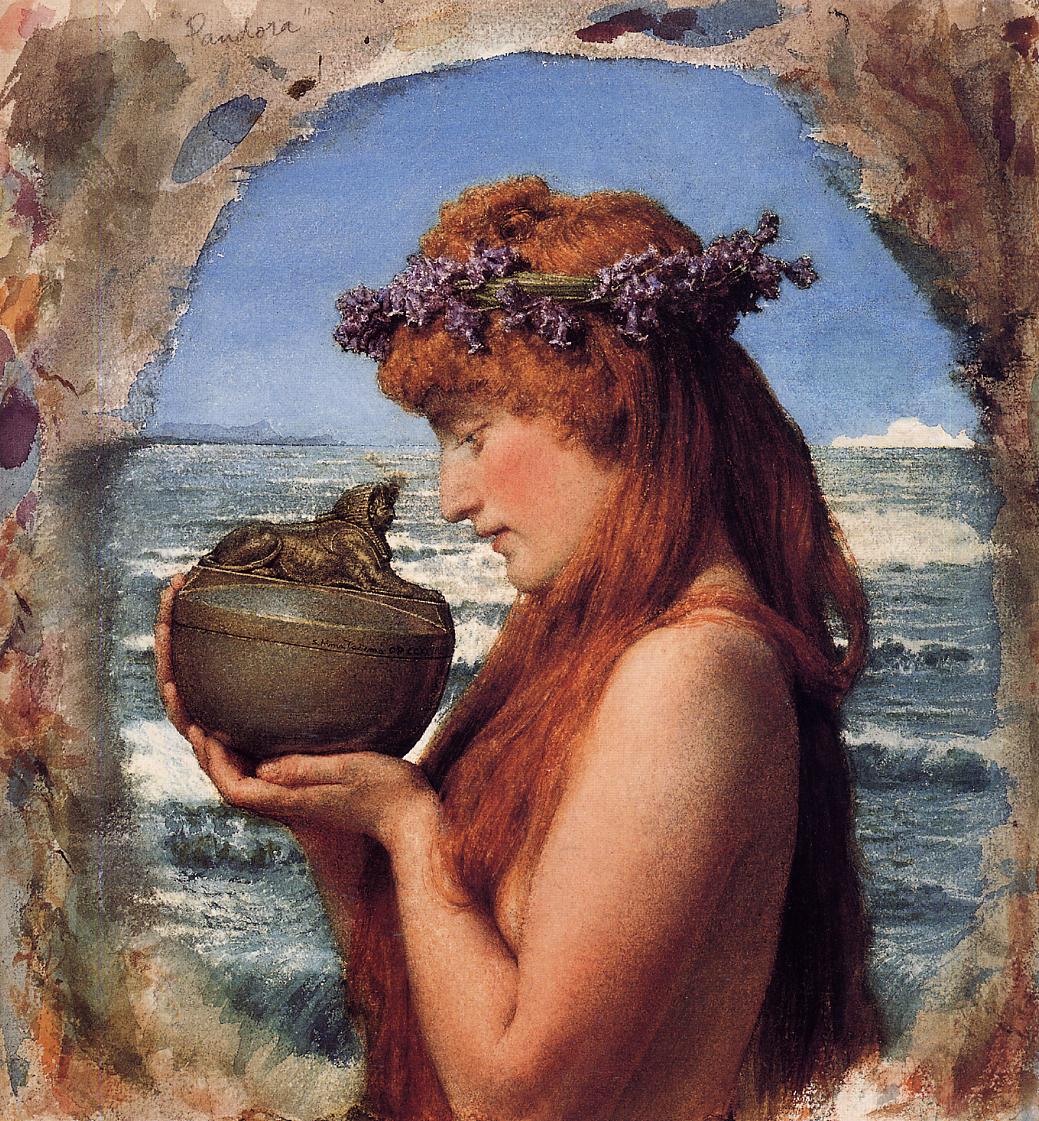 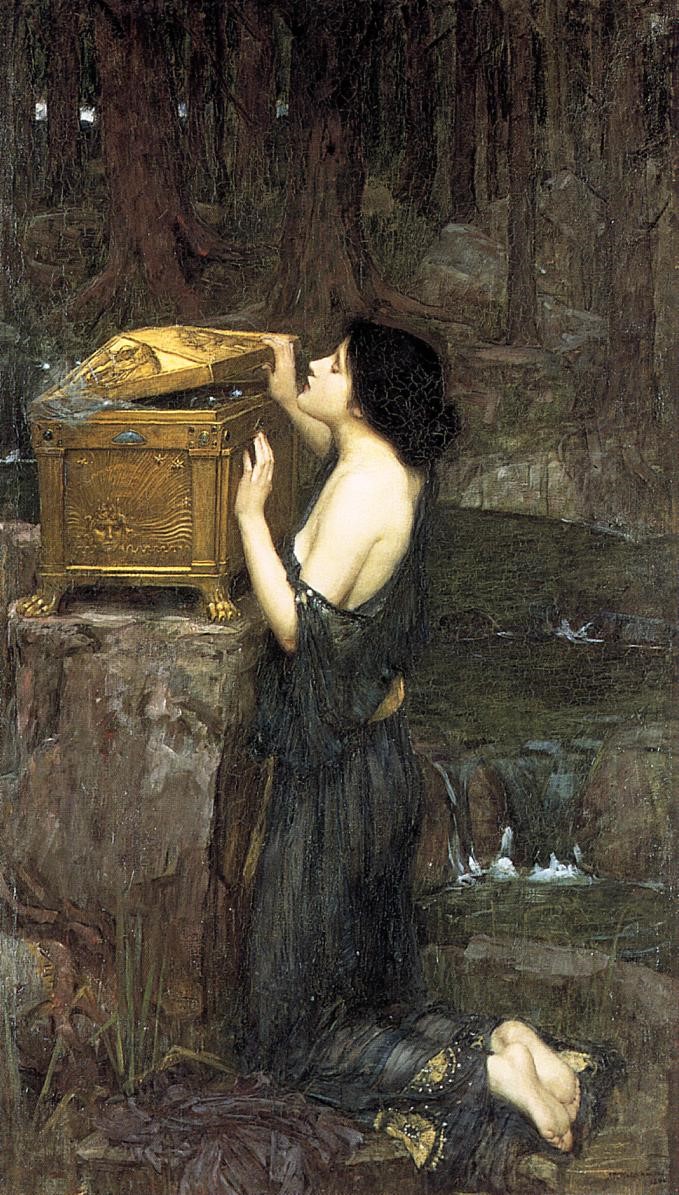 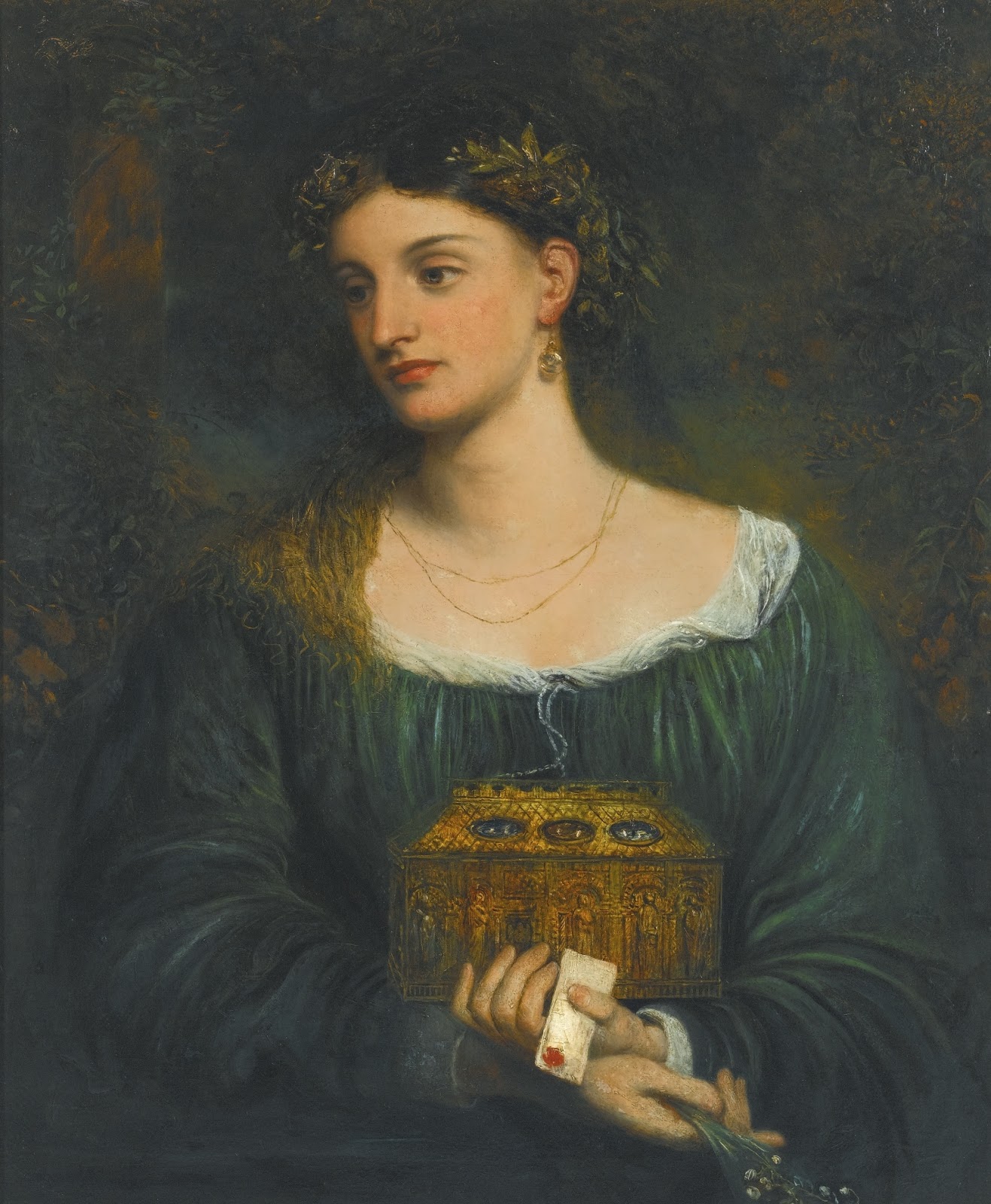 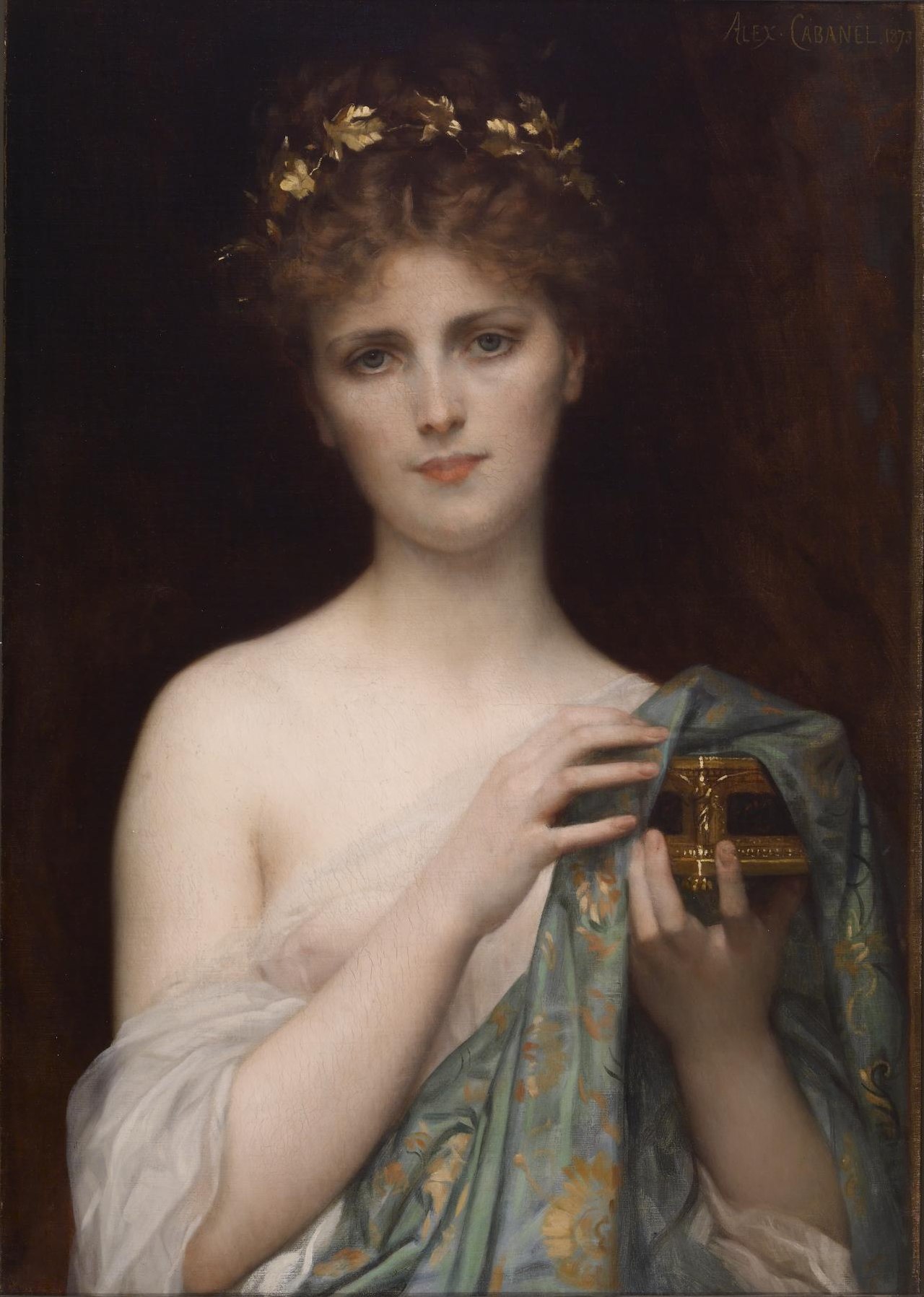 So said the father of men and gods, and laughed aloud. [60] And he bade famous Hephaestus make haste and mix earth with water and to put in it the voice and strength of human kind, and fashion a sweet, lovely maiden-shape, like to the immortal goddesses in face; and Athena to teach her needlework and the weaving of the varied web; [65] and golden Aphrodite to shed grace upon her head and cruel longing and cares that weary the limbs. And he charged Hermes the guide, the Slayer of Argus, to put in her a shameless mind and a deceitful nature. So he ordered. And they obeyed the lord Zeus the son of Cronos. [70] Forthwith the famous Lame God moulded clay in the likeness of a modest maid, as the son of Cronos purposed. And the goddess brighteyed Athena girded and clothed her, and the divine Graces and queenly Persuasion put necklaces of gold upon her, [75] and the rich-haired Hours crowned her head with spring flowers. And Pallas Athena bedecked her form with all manner of finery. Also the Guide, the Slayer of Argus, contrived within her lies and crafty words and a deceitful nature at the will of loud thundering Zeus, [80] and the Herald of the gods put speech in her. And he called this woman Pandora,1 because all they who dwelt on Olympus gave each a gift, a plague to men who eat bread.

But when he had finished the sheer, hopeless snare, the Father sent glorious Argus-Slayer, [85] the swift messenger of the gods, to take it to Epimetheus as a gift. And Epimetheus did not think on what Prometheus had said to him, bidding him never take a gift of Olympian Zeus, but to send it back for fear it might prove to be something harmful to men. But he took the gift, and afterwards, when the evil thing was already his, he understood. [90] For ere this the tribes of men lived on earth remote and free from ills and hard toil and heavy sicknesses which bring the Fates upon men; for in misery men grow old quickly. But the woman took off the great lid of the jar with her hands [95] and scattered, all these and her thought caused sorrow and mischief to men. Only Hope remained there in an unbreakable home within under the rim of the great jar, and did not fly out at the door; for ere that, the lid of the jar stopped her, by the will of Aegis-holding Zeus who gathers the clouds. [100] But the rest, countless plagues, wander amongst men; for earth is full of evils, and the sea is full. Of themselves diseases come upon men continually by day and by night, bringing mischief to mortals silently; for wise Zeus took away speech from them. [105] So is there no way to escape the will of Zeus. Or if you will, I will sum you up another tale well and skilfully—and do you lay it up in your heart,—how the gods and mortal men sprang from one source.