The Rival Ladies is in Jacobean and Restoration Plays.

Samuel Pepys' Diary 04 August 1664. 04 Aug 1664. Up betimes and to the office, fitting myself against a great dispute about the East India Company, which spent afterwards with us all the morning.
At noon dined with Sir W. Pen (43), a piece of beef only, and I counterfeited a friendship and mirth which I cannot have with him, yet out with him by his coach, and he did carry me to a play and pay for me at the King's house, which is "The Rivall Ladys", a very innocent and most pretty witty play. I was much pleased with it, and it being given me, I look upon it as no breach to my oathe. Here we hear that Clun, one of their best actors, was, the last night, going out of towne (after he had acted the Alchymist, wherein was one of his best parts that he acts) to his country-house, set upon and murdered; one of the rogues taken, an Irish fellow. It seems most cruelly butchered and bound. The house will have a great miss of him.
Thence visited my Lady Sandwich (39), who tells me my Lord FitzHarding (34) is to be made a Marquis [Note. TT. He wasn't].

Thence home to my office late, and so to supper and to bed. 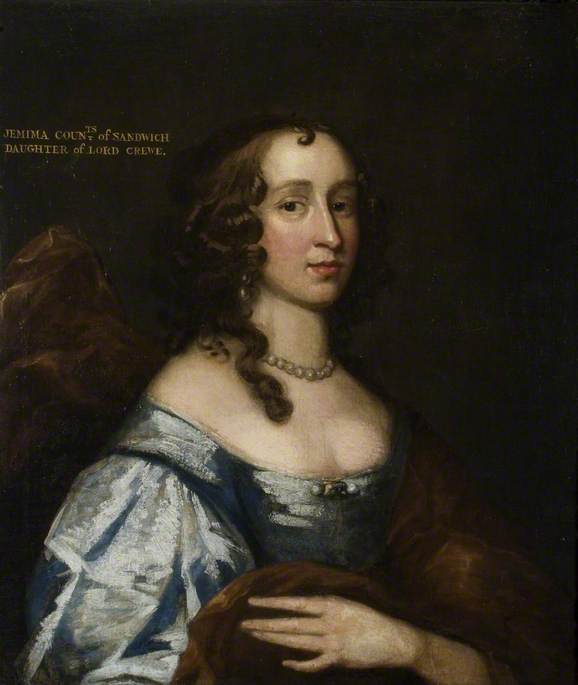 Samuel Pepys' Diary 18 July 1666. 18 Jul 1666. Up in good case, and so by coach to St. James's after my fellows, and there did our business, which is mostly every day to complain of want of money, and that only will undo us in a little time. Here, among other things, before us all, the Duke of Yorke (32) did say, that now at length he is come to a sure knowledge that the Dutch did lose in the late engagements twenty-nine captains and thirteen ships. Upon which Sir W. Coventry (38) did publickly move, that if his Royal Highness had this of a certainty, it would be of use to send this down to the fleete, and to cause it to be spread about the fleete, for the recovering of the spirits of the officers and seamen; who are under great dejectedness for want of knowing that they did do any thing against the enemy, notwithstanding all that they did to us. Which, though it be true, yet methought was one of the most dishonourable motions to our countrymen that ever was made; and is worth remembering.

Thence with Sir W. Pen (45) home, calling at Lilly's (47), to have a time appointed when to be drawn among the other Commanders of Flags the last year's fight. And so full of work Lilly (47) is, that he was faro to take his table-book out to see how his time is appointed, and appointed six days hence for him to come between seven and eight in the morning.
Thence with him home; and there by appointment I find Dr. Fuller (58), now Bishop of Limericke, in Ireland; whom I knew in his low condition at Twittenham. I had also by his desire Sir W. Pen (45), and with him his lady (42) and daughter (15), and had a good dinner, and find the Bishop the same good man as ever; and in a word, kind to us, and, methinks, one of the comeliest and most becoming prelates in all respects that ever I saw in my life. During dinner comes an acquaintance of his, Sir Thomas Littleton (45); whom I knew not while he was in my house, but liked his discourse; and afterwards, by Sir W. Pen (45), do come to know that he is one of the greatest speakers in the House of Commons, and the usual second to the great Vaughan (62). So was sorry I did observe him no more, and gain more of his acquaintance.

After dinner, they being gone, and I mightily pleased with my guests, I down the river to Greenwich, about business, and thence walked to Woolwich, reading "The Rivall Ladys" all the way, and find it a most pleasant and fine writ play.
At Woolwich saw Mr. Shelden, it being late, and there eat and drank, being kindly used by him and Bab, and so by water to Deptford, it being 10 o'clock before I got to Deptford, and dark, and there to Bagwell's, and, having staid there a while, away home, and after supper to bed. The Duke of Yorke (32) said this day that by the letters from the Generals they would sail with the Fleete this day or to-morrow.

Samuel Pepys' Diary 02 August 1666. 02 Aug 1666. [Up] and to the office, where we sat, and in discourse at the table with Sir W. Batten (65), I was obliged to tell him it was an untruth, which did displease him mightily, and parted at noon very angry with me. At home find Lovett, who brought me some papers varnished, and showed me my crucifix, which will be very fine when done. He dined with me and Balty's wife, who is in great pain for her husband, not hearing of him since the fight; but I understand he was not in it, going hence too late, and I am glad of it.
Thence to the office, and thither comes to me Creed, and he and I walked a good while, and then to the Victualling Office together, and there with Mr. Gawden I did much business, and so away with Creed again, and by coach to see my Lord Bruncker (46), who it seems was not well yesterday, but being come thither, I find his coach ready to carry him abroad, but Tom, his footman, whatever the matter was, was lothe to desire me to come in, but I walked a great while in the Piatza till I was going away, but by and by my Lord himself comes down and coldly received me.
So I soon parted, having enough for my over officious folly in troubling myself to visit him, and I am apt to think that he was fearfull that my coming was out of design to see how he spent his time [rather] than to enquire after his health. So parted, and I with Creed down to the New Exchange Stairs, and there I took water, and he parted, so home, and then down to Woolwich, reading and making an end of the "Rival Ladys", and find it a very pretty play.
At Woolwich, it being now night, I find my wife and Mercer, and Mr. Batelier and Mary there, and a supper getting ready. So I staid, in some pain, it being late, and post night. So supped and merrily home, but it was twelve at night first. However, sent away some letters, and home to bed.